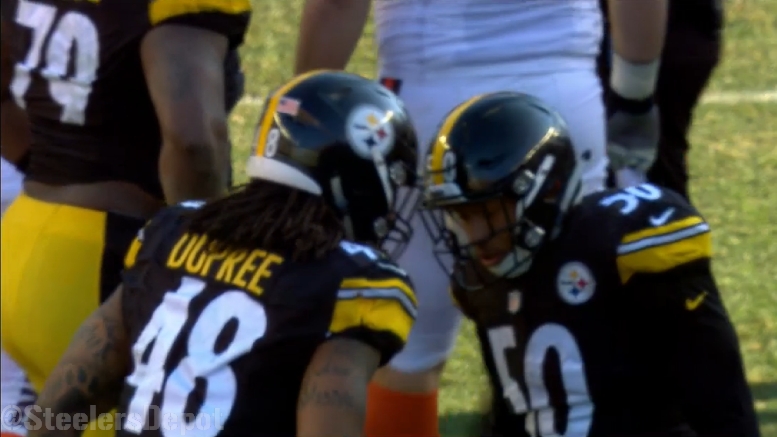 We hear about players being asked about themselves or their opponent on a regular basis. But it’s a little less common for a player to be asked about one of his teammates and what makes them so successful. Ryan Shazier was asked about Bud Dupree’s performance against the Miami Dolphins, and his overall makeup, and gushed about the young linebacker’s play.

“People underestimate his closing speed,” Shazier said via Steelers.com. “There are a lot of guys on this team who are a lot faster than they look on film. When you just see him in person, it’s ridiculous. The only way to know how fast Bud is pretty much playing with him or going to the Combine and playing with him.”

Shazier’s response came after a reporter asked about the hit on Matt Moore, where Dupree rushed in from 15 yards away to obliterate Moore. The play was flagged, and rightfully so, accompanied by a fine this week, but it illustrated the rare athleticism he has at around 260 pounds.

“He’s a species man. He’s a huge person. Fast, guy who is really blessed with the talents and all the things he’s able to do.”

Dupree’s return from sports hernia surgery has stabilized the outside linebacker spot. The rotation was scrapped with he and James Harrison getting almost all the snaps. Those two have responded and the entire pass rush has picked up, a big reason why the Steelers’ defense – and team – has gone on their eight game win streak.

He will have his hands full Sunday though. Harrison gets the comparatively much easier matchup, going against Eric Fisher, a guy he has dominated time and time again. Dupree will square off versus Mitchell Schwartz, one of the top right tackles in the NFL.

Not that we’re focusing very on the long-term but it’s creating even more excitement for Dupree in the 2017 season. Hopefully fully healthy, he can hit the ground running and become the dominant pass rusher he was drafted to be.

Because he isn’t quite yet there.

But he is definitely another species.