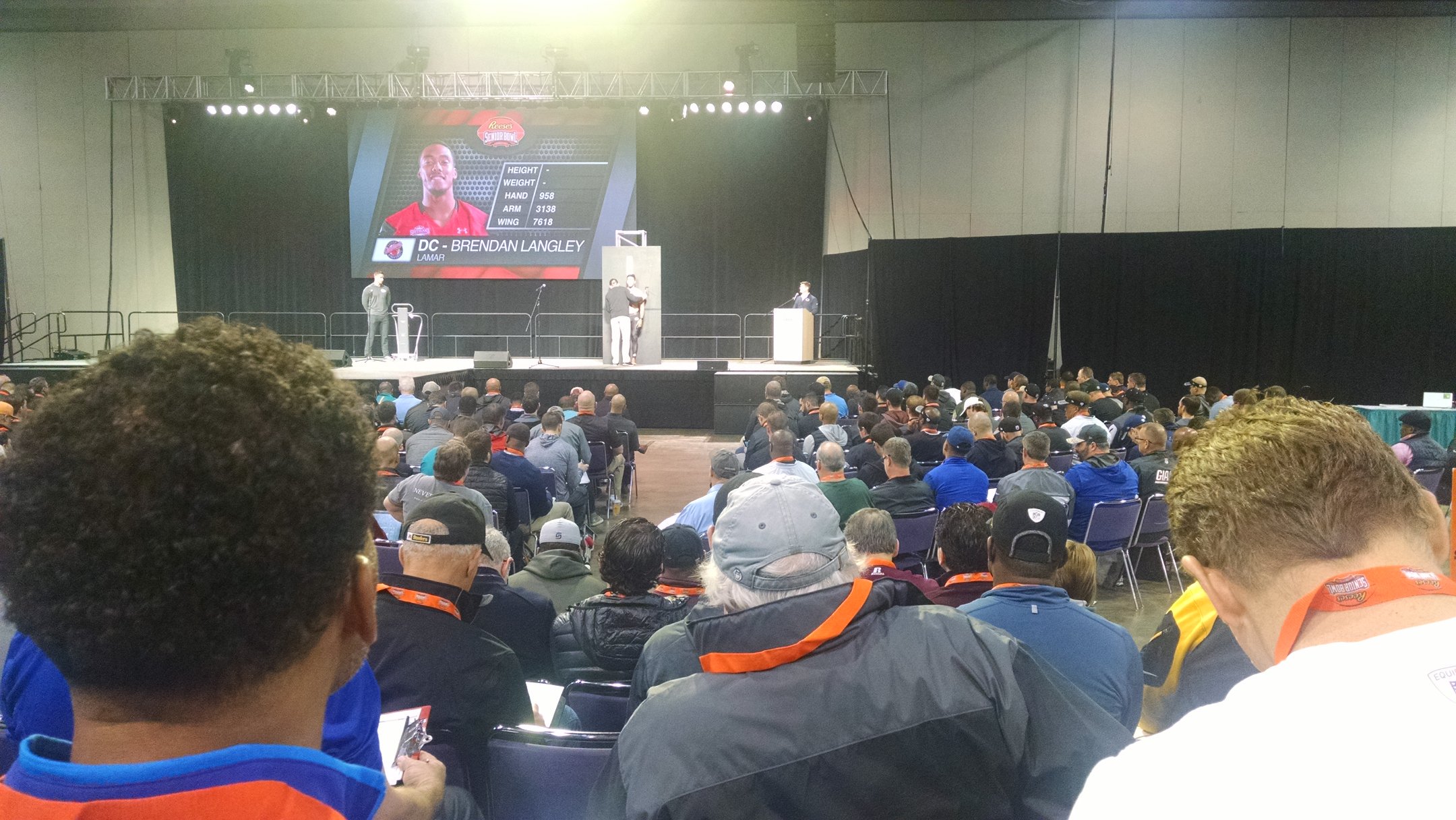 Today marks the first official day of all the fun stuff the 68th Senior Bowl has to offer. Early wakeup for things, an 8:30 AM weigh-in for the North and South squads.

The cool thing about the Senior Bowl is how up-close and personal you get with scouts and media types. Mike Mayock sat two seats over and chatted up scouts from the New Orleans Saints and Chicago Bears throughout while shaking hands with the many who came over to say hello.

As a general but important reminder, don’t make too much out of a weigh-in. Football isn’t played on a scale or measuring tape. They are guides that can help weed out those who don’t meet your particular threshold but as always, the tape rules the day. Practice begins this afternoon and that’s where things really begin to matter.

Anyway, my general impressions from the event before I head off to lunch (sponsored by the good people at TouringPlans.com).

– Size doesn’t equate to talent but if it did, USC offensive tackle Zach Banner would’ve been a first round pick. The biggest of the day, coming in at 6’8 and three-eighths (6’8/3) and a whopping 361 pounds. Nearly an 83 inch wingspan, too.

– Ohio EDGE Tarell Basham has an impressive makeup. 6’3, 259 with big hands and nearly 33 inch length. Plays with power though he has is limited when running the arc. The tools are there, he just needs work on being consistent with everything, from snap count to holding the point against the run.

– Bucknell offensive tackle Julien Davenport turned some heads. 6’6/6, 310 pounds with 36 inch arms. One of many FCS/D2 players in Mobile.

– There aren’t many big, long corners down here but West Virginia’s Rasul Douglas bucks the trend. At 6’2, he’s the tallest one for either side with 32 1/8 inch arms.

– Indiana guard Dan Feeney just looks like a good ‘ol country boy, with broad shoulders on his 6’4, 304 pound frame. Length and hand size all check out positively as well. Not that I’m expecting the Steelers to draft an offensive linemen.

– Disappointed Kareem Hunt came in much lighter than listed on Toledo’s website. 208 today compared to 225 listed. Losing out on my Mendenhall/Bell comparison.

– UConn safety Obi Melifonwu had one of the best looking physiques of anyone down here. Believe it was Mayock who muttered to himself, “you gotta be kidding me” when he walked on the stage. Official weigh-in of 6’4 219 with 32 5/8 inch arms.

– Youngstown State OLB Derek Rivers has the look the Steelers will likely be targeting. Dupree-ish size at 6’4, 250 and 32 3/8 inch arms. He should test pretty well too. Only issue is the fact the Steelers don’t dip into the FCS pool very often. When they do, the interest will be obvious like, as it was for Javon Hargrave last year.

– I still am interested in Jamari Staples but the Louisville wide receiver was as lanky as anyone. 6’3 190. Needs to order a couple of milkshakes.

– Houston’s Tyus Bowser is another one similar looking and used to Dupree. Don’t think he’s close to being that top level athlete but I like his size (6’2/4 244), length (33 inch arms) and he has more experience dropping into coverage than anyone else here.

– Corn Elder is someone I’m super pumped to watch but weighing in at 179 isn’t going to do him any favors. Gotta be able to handle the rigors of playing in the slot and being active in run support. The rest of his build won’t excite but the tape is strong.

– Bummed out about TE Gerald Everett. Going to fall into that tweener classification, I think. 6’2, 227 with super small 8 1/4 inch hands. Which is weird because he looked like a consistent and natural catcher. We’ll see how this week goes.

– A lot will be made out of Western Kentucky’s Forrest Lamp. Not strong measurables. 6’3/6 305 with sub-32 inch arm length. Sure the idea of him moving to guard will get talked about, though obviously, the transition isn’t as easy as many make it out to be.

– Villanova’s Tanoh Kpassagnon was an impressive looking small school kid. Filled out his frame, getting his weight up to 280 and standing tall at a hair under 6’7. Nearly 35 inch arms, 10 7/8 hands….he certainly looks like he belongs. He’ll play defensive end for the South.

– Donnel Pumphrey had one heck of a college career running the ball for San Diego State but he came in at 169 pounds today. That just won’t cut it in the NFL.

– KSU outside linebacker Jordan Willis has clearly been in the weight room. Good size at 6’3/6, 255 with 33 2/8 arms and 10 inch hands. Combine that with top notch production and he could become a fan to several teams down here, even though he may not test particularly well relative to others in his group.

Be sure to thank and check out our sponsor TouringPlans.com as we cover the 2017 Senior Bowl.