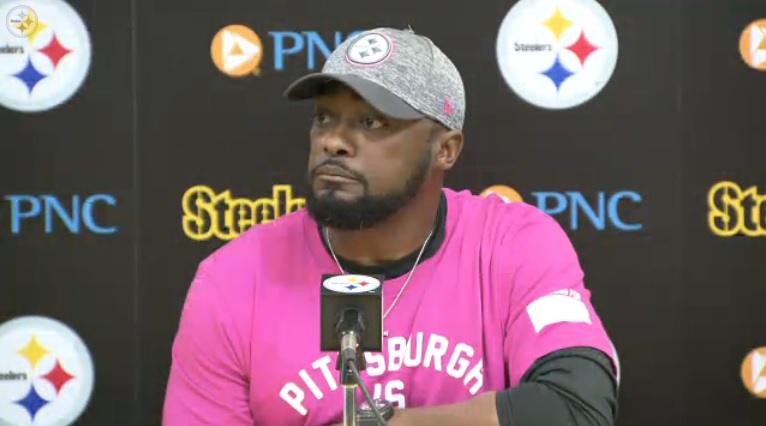 During yesterday’s pre-game press conference, Pittsburgh Steelers Head Coach Mike Tomlin wasted no time in delving into the topic that he knew would be the main topic of conversation on the day, in spite of the fact that his team is working toward preparing for their first appearance in the AFC Championship Game since the 2010 season.

That was, of course, the locker room video that wide receiver Antonio Brown posted live to Facebook, in which Tomlin featured prominently, using some colorful language that could probably be chalked up to ‘locker room talk’, as it is not the sort of vernacular that he uses through his public channels.

And for that he apologized for his choice of words. And frankly, I thought that he handled it incredibly well. He apologized not for having a sailor’s mouth, but for having that aspect of the coaching world exposed to the myriad impressionable young minds who look up to him, and individuals like him, as a role model.

“I’d like to say that the language on the video is regrettable. The language by me, by the others.  It’s regrettable because this thing that is the National Football League, this platform that we have, is a precious and awesome thing”, he said.

Tomlin continued, saying that that privilege of platform is “not something we take very lightly”, and that “the responsibility associated with being in this thing, just from a role model standpoint, is something that I personally embrace, it’s something that we as a team and organization embrace”.

In fact, the Steelers have a sort of lineage of head coaches who embrace their role as something greater than that of the organizer of a collective of football players. Tomlin understands that his behavior, and his example, has the power to influence others.

“That’s why the language, specifically with regard to the content, is regrettable”, he said. “That’s why we go to great lengths to preserve certain moments and certain interactions between us, because we’re very sensitive to the opportunity that we have as role models”.

I think you can read into that pretty clearly. He doesn’t regret saying what he said—and, just to be clear, he shouldn’t. He regrets that it was able to reach the ears of those to whom his example as a leader—and, dare I say it, as a role model for the African-American community, and the youth in particular—matters a great deal.

“So I apologize for the content of the video from that perspective. As a parent, as a member of a community, I take that very seriously, and so I sincerely issue an apology in that regard”, he concluded, for his role that he played in the video.

I know not everybody has such a high opinion of Tomlin as a coach and as a man as I do, but I certainly appreciated this perspective. He is under no obligation to hold himself up as an example to others. It’s a role that he actively chooses to embrace, and to take seriously, and his heartfelt comments yesterday vividly reflected that point.