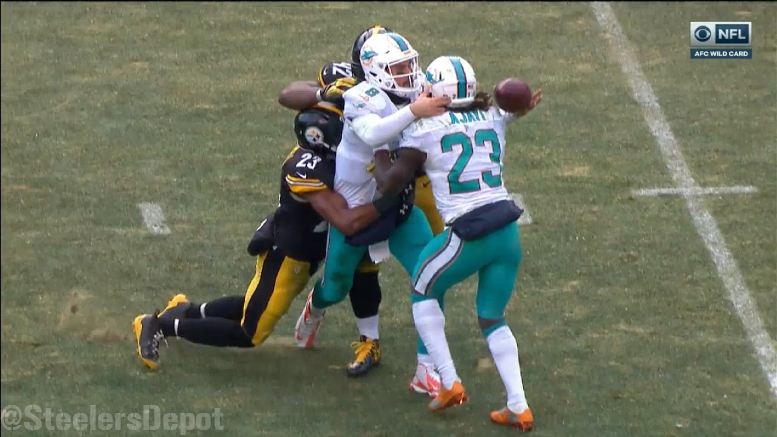 When the Pittsburgh Steelers brought in Mike Mitchell in free agency during the 2014 offseason to enter the starting lineup at free safety, they knew that they were bringing in a secondary player who was capable of rushing the passer. He recorded three and a half sacks in his one season of starting experience in the year prior, and had another three and a half sacks over his first four years in more limited playing time.

You might recall that safety Will Allen, he of the long career, had never recorded a sack until his final season with the Steelers in 2015, when he actually, inexplicably, recorded four. I mention that to point out that it’s not necessarily the norm for safeties, or defensive backs in general, to feature prominently in this role, and that it was one of the features of Mitchell’s background that attracted them.

Fast forward a few years, and we find Mitchell recording his first sack in the black and gold on Sunday in the Wildcard Round against the Dolphins. He played through three full regular seasons and a trio of playoff games over the past three years without recording a sack, and not for a lack of blitzing.

But at least he made it count. His starting partner, Sean Davis, had just briefly exited the field after banging up his shoulder coming in on a blitz of his own—the rookie had a sack and a half during the regular season, and another sack and a half taken away by the league’s official statisticians.

With Jordan Dangerfield stepping in and patrolling the deep field, Mitchell came in on the blitz and was able to chase down Matt Moore from his blind side, in doing so, dislodging the ball and allowing one of his teammates to fall on the ball for the recovery and the takeaway. A postseason strip sack, for his first quarterback takedown with the team, in his third year in Pittsburgh.

I might well have been the only one, but I have been waiting for this moment since he was drafted, as his ability to blitz was a facet of his game that I found quite intriguing when the Steelers first signed him. And make no mistake, while he may not have registered a sack in his three previous regular seasons, that does not mean that he did not find success as a blitzer.

Under Keith Butler, in fact, the Steelers have been using their defensive backs in their blitz schemes with greater frequency over the course of the past two seasons. In addition to Davis’ sack and a half—and the others taken away—William Gay also registered a sack.