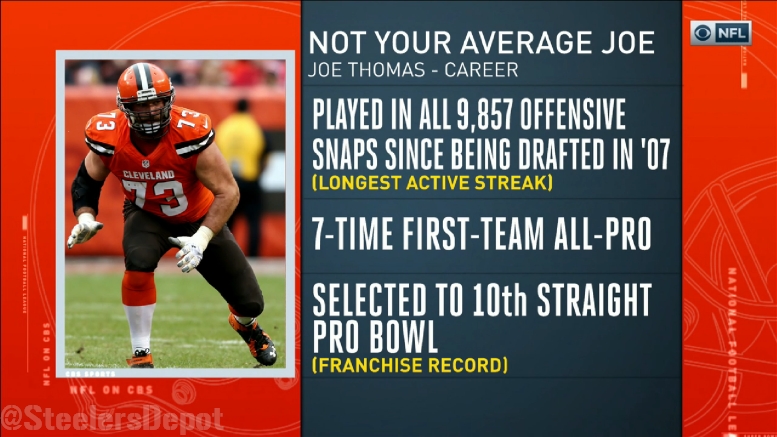 Joe Thomas may not be the first person that the Cleveland Browns’ front office would want to listen to for advice when you consider the fact that he has chosen to spend the entirely of his career with the organization through any number of changes at quarterback, head coach, and even owner.

The potential first-ballot Hall-of-Fame left tackle’s willingness to remain in Cleveland throughout his decorated career bears to mind the definition of insanity in its seeming expectation of different results from the same ingredients year in and year out. Yet he still has his own ideas as to how the Browns should use their prime resource with the first-overall pick in the 2017 NFL Draft.

Thomas was willing to forsake his own side of the ball for the betterment of the team as a whole as he sees it during his appearance on the Dan Patrick show, part of which was transcribed courtesy of Pro Football Talk in an article posted about his comments there.

“I would say you want to go defense”, he told Patrick when asked for his opinion on how the Browns should use their top pick; “I think you need to get a pass rusher”. He would not be wrong in setting his sights on the pass-rushing position when you consider the fact that Cleveland finished tied for second-to-last in the league with just 26 sacks in 2016.

The only player on defense who finished with more than three sacks for the Browns this past season was rookie second-round draft pick Emmanuel Ogbah, whose five and a half sacks comfortably led the team. Cam Johnson was surprising in second on the team with three sacks. It did not help that they did lose a couple of key defenders before and during the season.

Thomas went beyond suggesting that the Browns focus on the defensive side of the ball with their top pick. He also cautioned against using it on the quarterback position specifically. There is nothing that Cleveland lacks more than stability and talent at that position.

“You’ve got to be careful reaching for a quarterback and number one because if they fail, they don’t help your team at all”, he said, stating the obvious. He contrasted that to picking a defensive lineman by saying that “maybe they don’t live up to the hype, [but] you can still find a place to get him on the field and to have an impact”.

He pointed out that the Browns “need guys that can come in and start and that can contribute”, saying he thinks “that’s the risk of taking a quarterback”. A quarterback who is not ready to play is just going to sit on the sidelines. See Goff, Jared.

There is of course always the possibility that Cleveland takes the route that they went down last year. They held the second-overall pick in the 2015 NFL Draft before trading back twice and settling with a wide receiver at 15.