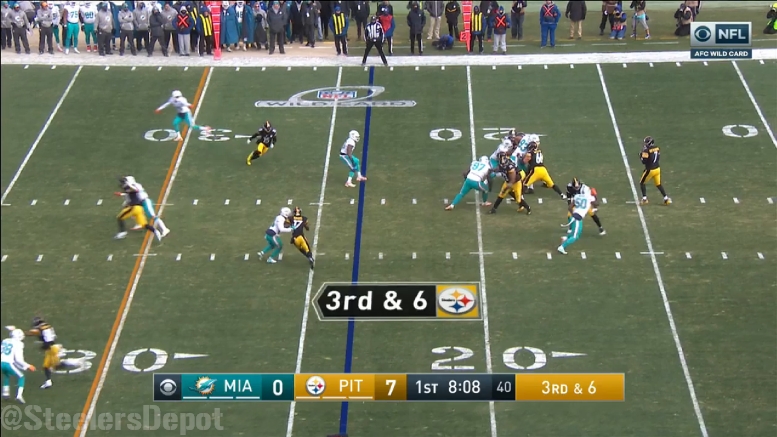 It may not be a great surprise to learn that there is a pretty obvious correlation between the Pittsburgh Steelers having a successful day converting third downs on offense and the offense as a whole having a good game and putting points on the board.

Sunday’s game against the Dolphins was just such a game, and in the final installment of my arbitrarily-tagged #FilmRoomFriday, I’m going to take a look at some of the Steelers’ successful third-down conversions during the game and how they were accomplished.

The Steelers scored on long touchdowns on their first two drives, but things could have gone awfully differently had that not managed to move the chains earlier on. Both of those drives featured key conversions on third down that helped set up what came through just a few players later.

On the fourth play of their opening drive, the offense was stuck on their own 31-yard line facing the prospect of converting a third and five. The Steelers presented an 11 set with all three wide receivers off to the right side.

Eli Rogers lined up in the slot, and took an angle to the sideline off the snap, while Cobi Hamilton and Antonio Brown set up for blocks. The play looked to be a screen for Brown—who would end the drive with a screen pass like this on the opposite side of the field—but instead it went inside to Rogers, who stopped short and turned in space to field the ball. With Maurkice Pouncey making a helpful chip down the field, he had clear sailing for the conversion, but did some extra lifting of his own for a 19-yard gain.

The next play was a 50-yard touchdown.

On the next drive, Pittsburgh was facing an even tougher situation, on their own 24-yard line and needing six yards to move the chains. Again showing an 11 look, the Steelers this time stacked Brown and Rogers to the left, with Demarcus Ayers to the right. Rogers and Ayers ran complementary crossing routes with Ayers coming underneath to field the ball while, downfield, two defenders ran into each other. Even still, he probably would not have been able to able up to Ayers for the 11-yard gain.

Late in the second quarter, from the 25 facing a third and three, the Steelers spread three receivers out, with Rogers and Ayer to the left drawing the attention of three defenders. Brown ran off the corner on the right side, allowing Le’Veon Bell to get out into the flat, comfortably winning the footrace with the trailing linebacker for the four yards and a first down.

Late in the third quarter, the Steelers showed a three-receiver set on third and five from the Dolphins’ eight. Instead of throwing, they pulled the guard while the tight end stashed to the left picked off the right-side linebacker, creating the alley for an untouched touchdown run for Bell.

It is with chain-moving play designs such as these—and the ensuing execution—that build sustained drives, and successful offenses. The Steelers will need even more of this on the road in Kansas City on Sunday.