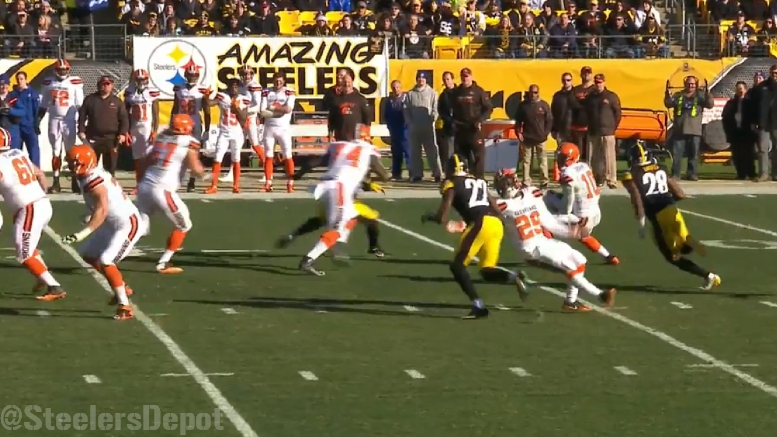 Pittsburgh Steelers safety Sean Davis has had a better rookie season than Troy Polamalu did. There, I said it.

Of course, that doesn’t exactly account for much, as Polamalu wasn’t exactly an every-down player and had his struggles as a rookie, but it wasn’t long after that that he became an All-World player, and eventually will go into the Hall of Fame.

I’m not exactly predicting that for Davis, but he certainly deserves to be recognized for his ability to step into the starting lineup at the strong safety spot and hold it together over the course of the Steelers’ seven-game winning streak, during which he hardly left the field, including on Sunday against the Browns.

He has reminded me at times in his run defense of Ryan Clark toward the end of that generation’s success, when Clark suddenly became instrumental in preventing good runs from turning into great ones.  Davis already shows a strong anticipatory approach to his run fills, as on an early carry by Isaiah Crowell for six yards.

Late in the first quarter, the Steelers sent the rookie safety in on a blitz two plays in a row. He forced a poor pass on the first rush, and was able to bring Robert Griffin III down on the second blitz for his first full-credit sack of the season—or at least the first one that survived the mid-week statistical review.

Davis beat the tight end simply with his speed and a shoulder dip for the sack, and he showed a similar quickness late in the first half to beat Griffin into the backfield to recover a high snap from the rookie backup center, which set the offense up for their first points of the day.

Still, he still has some room to grow, which will come with more and more exposure to the game. on the final play of the first half, the Browns were able to catch Davis inside in a zone while motioning the tight end around the formation into the flat with space to run for 12 yards because they were able to misdirect the rookie safety.

Late in the game, Crowell also managed to turn him inside out on a long run, though those sorts of plays in those circumstances are frequent and inevitable, and he did recover. In overtime, though, he took a bad angle on a Griffin run around the left edge, thinking he could shoot into the backfield to make the play. The decision resulted in a nine-yard gain.

On the play immediately following that run, Davis slipped through a tackle attempt on Crowell up the middle for an eight-yard gain and a first down that but the Browns comfortably inside field-goal range in overtime.

Overall I wouldn’t place this finale in the category of Davis’ best games of his rookie season, but it’s not as though it was particularly bad either. He was caught in a couple of poor situations, some of which exposed his lack of experience, but overall, he has been a very positive component of this defense.