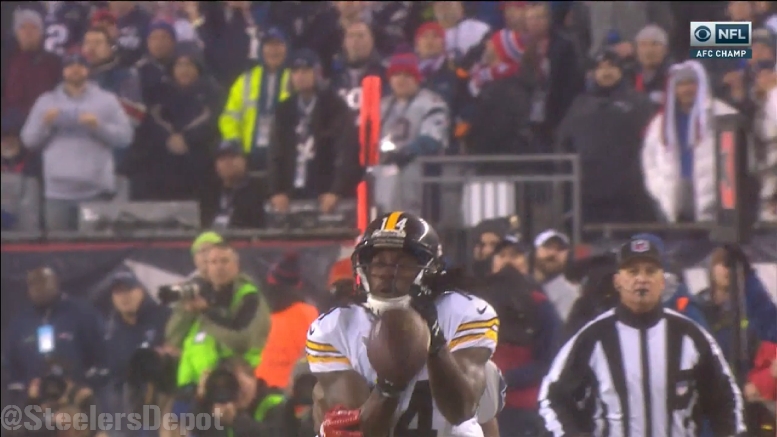 The Pittsburgh Steelers could potentially have the most explosive offense in the entire league during the 2017 season if they are able to get all their ducks in a row. One of those ducks is applying for reinstatement after during a year-long banishment for violation of the substance abuse ability. Another one of the ducks has a busted wing.

Sammie Coates’ second season ended in him playing the role of the ugly duckling. But he started off the season looking as though he might grow into a Swann. His six receptions of at least 40 yards during the first five games of the season still stood as tied for the most in the league by the end of the season.

Sunday was his last chance of the season to show that he could make an impact even with a couple of broken fingers on one of his hands during the year. What we saw from him was a big of the good, a fair bit of the bad, and a dose of the ugly. Starting with the ugly.

Ben Roethlisberger didn’t waste too much time looking in Coates’ direction while targeting him on third and one on a deep pass on the Steelers’ opening drive. It looked to be a home run in the making after he had outraced his defender. The pass hung up just a bit to force him to slow his stride, but Coates alligator-arms the catch attempt for a dropped pass that could have helped open up the game early.

He was fairly silent for the next couple of quarters before Roethlisberger went back to him on the opening play of the second half. It was a simple stop route that chased his coverage off him to allow him to catch an easy pass a few yards past the line of scrimmage. He nearly blew it by working backwards trying to escape the pursuit tackling before managing to get back to where he started for four yards.

Roethlisberger looked his way again late in the third on another deep target. And he finally hit. It was the first connection on a deep target that the pair had had since the fifth game of the year. The Steelers got Coates isolated outside the numbers on the right before shifting the slot receiver to his side. But Eli Rogers worked inside and Coates pounced on the sideline and easily winning. The receiver was beyond his defender for a couple of yards to let him haul in the vertical pass.

It was so nice that Roethlisberger hoped to do it twice, a few plays later from the 22. The quarterback looked for Coates in the end zone, and he had an opportunity to make a diving attempt for the score only to see it go off his outstretched hands.

The quarterback tried for one last deep hookup late in the game after he was forced to scramble out of the pocket. He saw Coates breaking off his route and heading to the sideline when he fired the ball. it was again a difficult pass to catch. but it again went off his hands.

I do sincerely believe that Coates has had some mental hurdles that he could not overcome and that future success will breed further success. He will get right and continue his emergence as a bright young wide receiver in 2017. But he clearly got sidetracked in a major way this past season that affected his confidence. Broken fingers don’t help either.