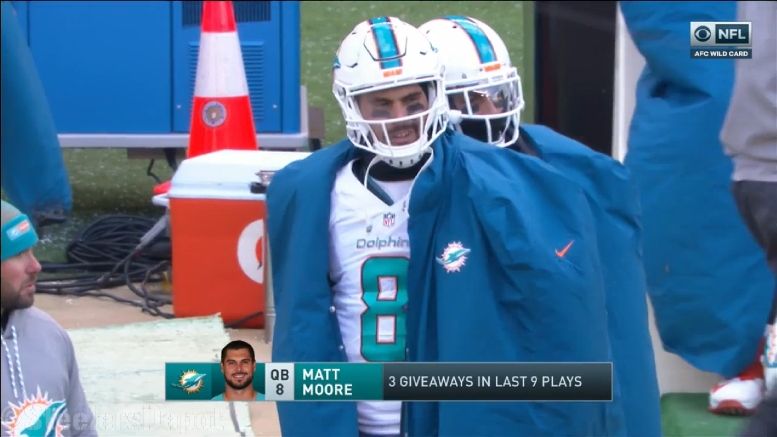 The Pittsburgh Steelers know that they got quite a bit of a break when it comes to playing a Miami Dolphins team that was missing about a third or so of the players who started the previous game between the two teams. The most significant absence was quarterback Ryan Tannehill, who suffered an ACL injury late in the season.

While his backup, Matt Moore, filled in admirably in his absence, winning two of the final three games of the season and throwing eight touchdowns to three interceptions in that span, the Dolphins yesterday against the Steelers defense, to put it simply—and please pardon the pun—needed more from the position.

He also threw for 289 yards, averaging just a bit over eight yards per pass attempt. And he did throw for one touchdown pass. This was on a day on which the Dolphins could not get anything done on the ground, with Jay Ajayi limited to only 33 rushing yards on 16 carries.

But Moore took five sacks, two of which resulted in fumbles, forced by James Harrison and Mike Mitchell, and recovered by Stephon Tuitt and L.T. Walton, respectively. And on the first offensive play for the Dolphins after that second lost fumble, the 32-year-old quarterback threw an interception that set the Steelers up at the 25-yard line.

The clear difference between this game and the three previous games is that the Dolphins’ offensive line did a much better job of protecting Moore—as did the running game—as he was only sacked once on 88 dropbacks during his play in the regular season.

The Steelers dropped him five times, and forced him to turn the ball over three times in a span of just nine plays. And they were highly costly turnovers that produced a minimum of a 13-point swing, as the Steelers got a touchdown and a pair of field goals off of those turnovers.

That first turnover, produced by the Harrison sack, also came on first and goal, meaning that the Dolphins were well within scoring position, so that cost the road team even more points, in all likelihood. A backup quarterback, at a bare minimum, can’t cost you the game, and turning the ball over three times is not the way to avoid that.

The Steelers won’t be playing a backup quarterback next week in Kansas City, however. As badly as the Steelers wanted a redo against the Dolphins, Alex Smith and the Chiefs are no doubt eager to avenge their 43-14 loss from earlier in the season at Heinz Field. Matt Moore couldn’t give the Dolphins enough yesterday, but Pittsburgh’s next opponent will be a much taller task.