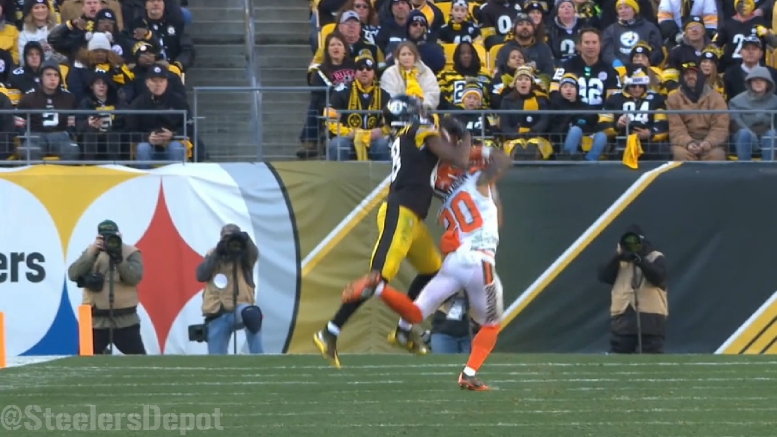 For a long stretch during this season—really, about half of the year—the Pittsburgh Steelers have been robbed of most of their deep passing game due to the injuries to Sammie Coates and Darrius Heyward-Bey. Coates was injured in the fifth game of the season and has caught two passes for 14 yards since then.

Heyward-Bey only returned from a foot injury last week after missing seven games, but a week ago, he only contributed to special teams—which, admittedly, was good to see, because he is one of their best contributors in that phase and his absence was noticeable.

Today, however, the Steelers finally got him back on offense, and his contributions were obvious, because Landry Jones frequently targeted him on deep balls. He was targeted four times during the game, and three of them on deep passes. It was on the final pass in his direction that they finally connected.

Late in the game, midway through the fourth quarter, the Steelers were facing a second and six from their own 43-yard line when Jones launched one deep for Heyward-Bey. It was a bit underthrown, but the veteran receiver went up and got it, making the catch for 46 yards, down to the 11-yard line.

Three plays later, Jones connected with Demarcus Ayers on a crossing route for an 11-yard touchdown, which, at the time, represented the game-winning points, but in the end was just a go-ahead score, because the Browns were able to quickly respond with a touchdown of their own, tying the game at 21 and eventually sending it into overtime.

But things could have looked a lot different had Heyward-Bey not made his biggest contribution earlier in the game. with the Steelers trailing 14-7 at the time, Jones threw an interception that was initially ruled to have resulted in a touchdown.

Upon further review of the play, however, it showed that Heyward-Bey made the touchdown-saving play, forcing the cornerback to lose the ball at the goal line. He fumbled, and it trickled out of bound for a touchback.

The game was very nearly, by a matter of inches, a 21-7 game, but instead, the Steelers drove down the field to score their second touchdown to make it 14-14. In all, they scored 21 unanswered points to take the lead late, but the Browns then scored 10 unanswered, and Pittsburgh was required to register their third game-winning drive in as many weeks.

As far as special teams goes, Heyward-Bey registered a tackle on one punt return and also downed the ball on another punt. With Shamarko Thomas on injured reserve, he is their only reliable gunner, a fact that should not be overlooked.

But the fact that he has proven to be able to return to the offensive side of the ball as a deep threat on the eve of a playoff run, I think is arguably the most significant development that came out of this supposedly meaningless regular-season finale.