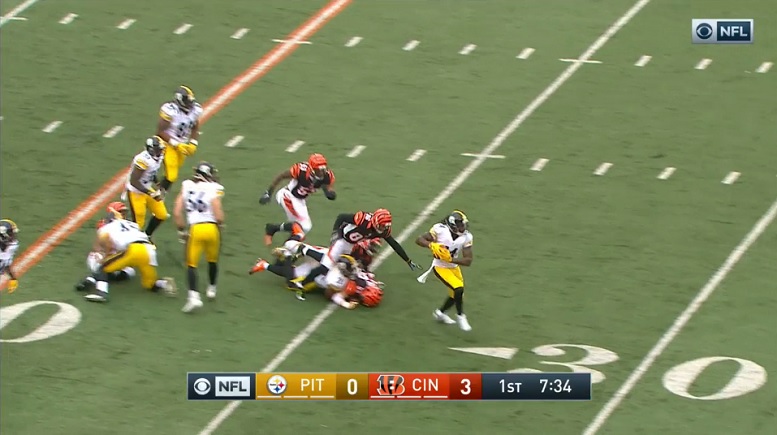 Even though Pittsburgh Steelers cornerback Justin Gilbert possesses the ability to return kickoffs, head coach Mike Tomlin has decided against using him in that role this season. During his Tuesday press conference, Tomlin was asked if there’s a reason why that’s the case as his team prepares to host the Baltimore Ravens Christmas night.

“Yeah, we’ve been happy with the production of Sammie Coates to this point,” Tomlin said.

And running back Fitzgerald Toussaint as well?

“Again, Sammie’s the return-man, Toussaint is the off-returner, if you will, the designated lead-blocker,” Tomlin said when asked about the Steelers running back.

In Sunday’s win over the Cincinnati Bengals, wide receiver Sammie Coates returned one kickoff for 44 yards, which was a season-long for the team. In fact, it was the longest kickoff return the Steelers have had since 2013 when former wide receiver Emmanuel Sanders returned one 46 yards.

While Toussaint is the Steelers off-returner, he’s returned 12 kickoffs so far this season compared to just six by Coates. Against the Bengals, the Steelers backup running back returned the other two returnable kickoffs for a total of 32 yards with a long of 20.

The Steelers kickoff return unit certainly could use some improvement and that’s something special teams coordinator Danny Smith needs to figure out quickly. The same goes with the kickoff coverage unit that allowed the Bengals to average 33.2 yards on their five opportunities this past Sunday. Tomlin was asked Tuesday about the kickoff coverage problems on Sunday and what led to two of them being long ones by Cincinnati wide receiver Alex Erickson.

“A little bit of negligence by us, but a lot of execution by them,” Tomlin said. “I thought that their kick returner, 12 [Erickson], did a nice job of not only returning the ball, but setting up the structure of the return to draw the coverage unit and then bursting to the perimeter. I would be remiss if I didn’t acknowledge quality execution by him, he’s one of the top five or so in football going into the stadium and proved that.”

One of Erickson’s kickoff returns would have gone for a touchdown had kicker Chris Boswell not made a great shoestring tackle. It was a huge play by the Steelers kicker and one Tomlin acknowledged again on Tuesday.

“Bigger than any kick he made,” Tomlin said.