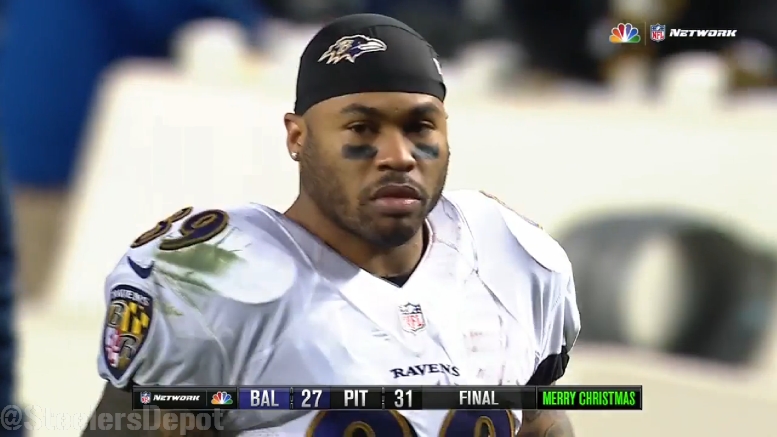 Over the course of the past couple of seasons, the Baltimore Ravens seemed equipped to capitalize on every opportunity presented to them to add to the Pittsburgh Steelers’ grief. Not only did they knock the Steelers out of the playoffs in the 2014 season, they beat Pittsburgh twice a year ago, costing them the division—in a year in which they only won five games in total.

They had the chance last night to as to the Steelers’ woes, while at the same time edging very close to securing the division for themselves—but their stakes were even bigger. If the Ravens lost to the Steelers last night, they would be officially eliminated from playoff contention.

And for the first time in five meetings, the shoe was finally on the other foot. The Steelers, against the odds, scored not one but two go-ahead drives in the fourth quarter, with the second coming with under 90 seconds to play, and ending with just nine seconds left on the clock.

The Ravens certainly had their fair share of mistakes—a botched snap and hold on a field goal, for one thing—but they really seized the opportunities presented in the third quarter with a pair of poor Ben Roethlisberger interceptions, the first that they quickly turned into eight points, and the second netting a field goal, giving them 11 points off of turnovers, a 10-point lead.

You do have to give them credit. The Steelers stormed back in the fourth quarter, swept all the momentum, scoring two touchdowns and taking the league. But Joe Flacco and their offense came right back and put up an excellent response drive, which, if I’m not mistaken, including third-down conversions on four separate occasions. It ended in a touchdown that gave them a three-point lead with just 78 seconds in total remaining in the game.

That drive was crushing, and, predictably, albeit understandably, a great number of people packed it in, either metaphorically or literally, understanding, of course, that the Steelers would not be able to come back and score with such little time left.

The Ravens, after all, have a good defense, as thy showed in the first meeting between the two teams earlier this season, and they would hold their late lead in their second opportunity, of course. It had been the offense that was lagging and holding them back for most of the season.

Of course, that proved not to be the case, and the Steelers offense trekked down the field in suitable epic fashion to snatch victory from the jaws of defeat, and joy from the beak of a Raven.

The Steelers ended Baltimore’s season last night—oh, sure, they have one, final, meaningless regular season game left to play before they begin their draft preparations—and they did so in crushing fashion, repaying a favor that had been in the coming for far too long now. But the Ravens have begun to build a foundation this season that will continue. The games between these two teams will not get any easier from here.