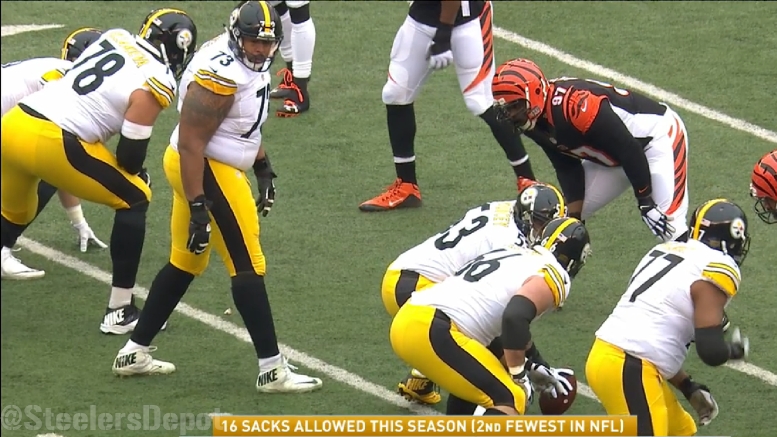 Over the course of the past several games, corresponding with the Pittsburgh Steelers’ current five-game winning streak, the team’s offensive line has been playing some of the best football as a group that it has played within the past decade or so, and that shows up not just in their rushing yardage totals—Le’Veon Bell 713 yards and five touchdowns in that span—but also in their pass protection.

Over that period of time, quarterback Ben Roethlisberger has been sacked just three times, and that third sack came only on Sunday, under pretty dubious circumstances that require an asterisk, as it was not really a pass-rushing situation.

On that play, Roethlisberger elected essentially to try to scramble up the middle fairly early on in the play after determining that he did not see what he was looking to see. He was tackled prior to being able to reach the line of scrimmage, so technically, it goes down as a sack, but it is not something that would be blamed on the offensive line, and is not really in line with what we would consider relevant in this context.

If you consider the sack in light of that—that it was not really a sack in the conventional sense—then you could say that the Steelers offensive line has not given up a sack in four of their past five games. Even if you do not, of course, then they still have kept Roethlisberger clean in three of their last five games.

It would be worth pointing out, as well, that those four games all came on the road, in Cleveland, Indianapolis, Buffalo, and, on Sunday, in Cincinnati. The only game in which they gave up a pair of sacks was against the Giants at Heinz Field, facing arguably the best duo of pass-rushers that they have seen all season.

Over the course of the first 14 games of the season, the Steelers have only given up a total of 17 sacks, which is an average of just 1.2 sacks per game. Considering that they have in the past decade given up more than three sacks per game for a full season, the improvement is certainly notable.

11 of those 17 sacks came over the course of the first six games of the season, prior to the Steelers’ bye week, with four sacks coming against the Eagles in Philadelphia in Week Three—which has historically been a bad place for them to play.

That is the only game throughout this season in which they have given up more than two sacks in a game. In fact, in exactly half of their games played thus far—seven—the offensive line has not given up any sacks.