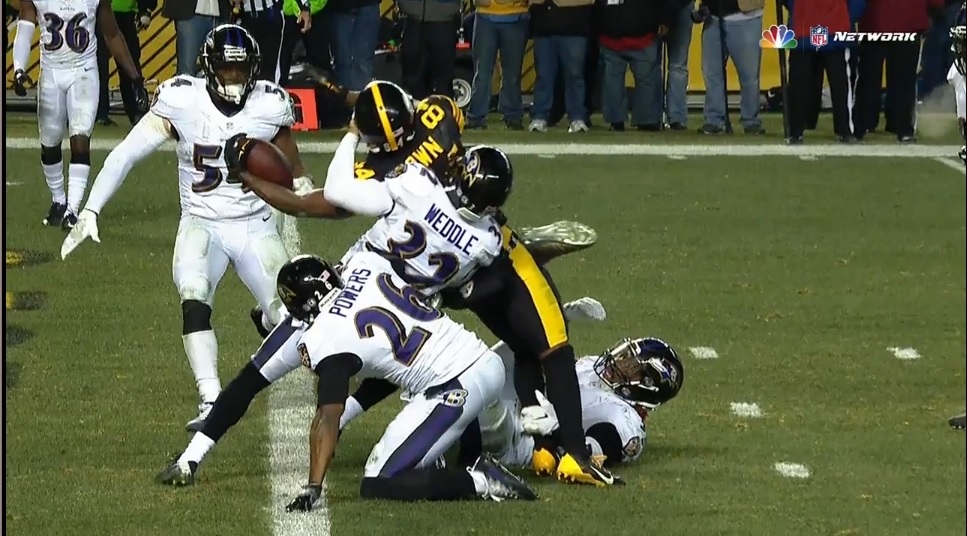 It’s no surprise that we’re all still talking about the Immaculate Extension that took place late in the Pittsburgh Steelers Sunday win over the Baltimore Ravens and that’s not going to stop anytime soon. During his weekly interview with Bob Labriola on Steelers Nation Radio, offensive coordinator Todd Haley also talked about the game-winning play and the route that wide receiver Antonio Brown was supposed to run during it.

“It’s a switch-release between he and Eli [Rogers] and he has to come down right inside the goal-line like he did and the way that it played out, he was the one that got the ball and the rest is history,” Haley said.

Brown, by the way, didn’t actually run his route inside the goal-line as he really couldn’t due to the tight coverage by the Ravens slot cornerback Jerraud Powers.

“But just a tremendous individual play, great throw to get it to him around [Terrell] Suggs jumping in Ben’s face and just the phenomenal individual play by AB,” Haley added.

Speaking of Ravens outside linebacker Terrell Suggs jumping in Roethlisberger’s face on that particular play, the Steelers apparently had a protection breakdown during it as we found out during the recent episode of Turning Point.

As you can see in the video right here, the Steelers slid their seven-man protection to the right against what turned out to be a four-man pass rush by the Ravens defense. This resulted in Suggs being left free and running back Le’Veon Bell noticed it.

“Hey Todd, on the wrong protection though,” Bell explained to Haley on the Steelers sideline immediately after the play. “That’s why I went that way, I’m like, I’m going to block Suggs.”

Haley then asked Bell if Suggs was indeed free on the play.

In the end, everything worked out in favor of the Steelers thanks to Brown’s incredible effort. So, what are a few of the things that Haley would pick out from that play to show young wide receivers moving forward?

“I just think his overall awareness, No. 1, and knowing where he was and knowing the situation, and that’s something that gets taken for granted with A.B.,” Haley told Labriola “He has a great feel for the game, really tremendous feel that benefits him a bunch when running routes, obviously, but also showed up there.

“And I just think just in general, you saw him throughout the game, the run after catch, if he had a choice to go out of bounds, or stay in and get a couple extra, he was putting his head down and going. He just wasn’t going to be denied and the big thing there is just the awareness and understanding the rules, and all you’ve got to do is get across the line and I thought Ramon [Foster] made a great hit on him.”

“It was only four yards, but it was the Mona Lisa.”