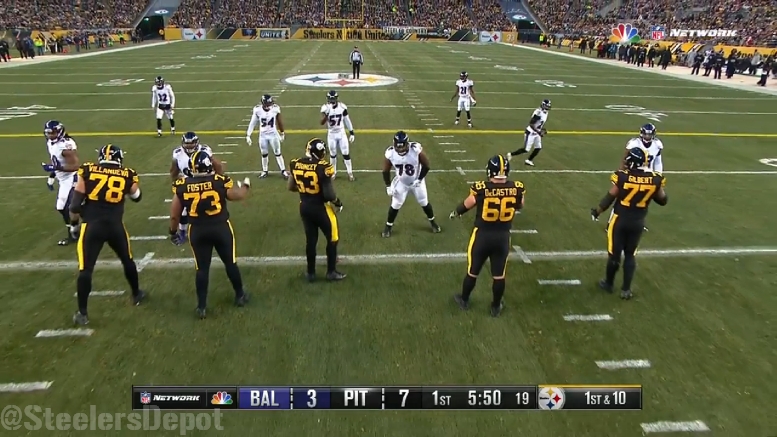 Over the course of the regular season, the Baltimore Ravens have been one of the most formidable defenses playing the run. The Pittsburgh Steelers found this out earlier in the season when Le’Veon Bell had one of the worst games of his career, gaining just 32 yards on 14 carries, scarcely more than two yards per carry.

That wasn’t much of a problem for Bell and the Steelers’ offensive line—and tight ends; and wide receivers—on Sunday, however, when they became just the fifth team this year to rush for at least 100 total yards, and only the fourth running back to do so. He is only the third to do so averaging more than four yards per carry.

Bell only carried the ball 20 times on Sunday, but he made them count, for a total of 120 yards. Averaging six yards per carry against the Ravens hasn’t happened too often for the Steelers over the years, but they made it look pretty easy, for once.

Considering the fact that the Ravens have held nine of 15 opponents to 65 rushing yards or fewer on the season, it should not be taken lightly what the Steelers and their running game was able to accomplish against them on Christmas, and much of that success was gained through attrition, rather than splash plays.

To that point, the Steelers had just one explosive run in the game—which was only their fifth of the season—which went for 23 yards. Four of Bell’s carries went for double-digit yardage, including two runs of 10 yards, and another of 13. All the other runs—including a rare two negative runs—went for single-digit gains or worse.

That is probably why—in addition to the fact that, yet again, they did not allow Ben Roethlisberger (or any quarterback) to be sacked, which was the fifth time that that has happened this year—former offensive lineman and current NFL Network writer Shaun O’Hara selected the Steelers’ offensive line as his selection for the best of the week.

This is the fourth time this season that they have earned that distinction, also previously receiving that accolade in the games against the Chiefs, Colts, and Bills. In case you were wondering, yes, that is three of the past five games, and yes, the line has been awfully impressive of late.

As I wrote earlier this week, the offensive line certainly looks as though it is already in postseason form and is gearing up to do some heavy lifting in the coming weeks. Whether or not they get much rest over the final game of the season—Maurkice Pouncey would certainly be a candidate to rest—it’s hard to imagine them losing much momentum given their recent performances. And, of course, Bell’s.