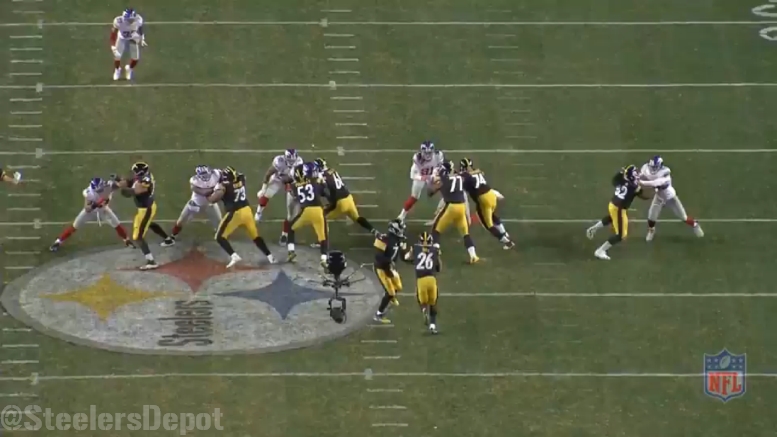 The Pittsburgh Steelers got a nice, long look at veteran offensive lineman Chris Hubbard earlier this season when he appeared for a three-game cameo as the team’s starting right tackle as an injury replacement. He held up surprisingly very well during that stint, and it would not be surprising to learn that his success in that role has had a correlation in their increased usage of him as a tackle-eligible in recent weeks.

Over the course of the past three weeks, Hubbard has logged time as a tackle-eligible for 48 snaps, and that includes a total of 17 snaps played in that role on Sunday. I would say, however, that his work on the perimeter of the offensive line, rather than as a part of it, has been a bit more spotty.

One play that is worth taking a look at is an early check-down pass about three minutes or so into the game. This was technically a 21 look with Hubbard as the only tight end, the only time they did this, plus a fullback. But Giants right defensive and Olivier Vernon did a nice job of setting him up for an outside move that forced Ben Roethlisberger to get the ball out. Le’Veon Bell salvaged this play with a nine-yard scamper.

On a run to the left this time midway through the second quarter, in a three-tight-end look, Hubbard was the inside of two tight ends on the play side. Lined up over Vernon, a slight chip from his tight end to his left helped Hubbard provide a strong seal of the end to allow Bell to get to the edge for seven yards.

Following a goal-line stop, the offense was forced to begin from their own three-yard line midway through the third quarter. Hubbard set up to the right of the line, with he and Marcus Gilbert working a combination block on the left defensive end to take him out of the play, which picked up two yards to give the offense some breathing room.

Shortly after that, on a long reception to begin the following drive, the lineman was back on the left side as the inside of two tight ends lined across from Vernon. On this play, the prized free agent beat him with a strong dash to the inside, but the left tackle was there to pick him up and keep the pocket relatively clean to get the throw off.

Finally, late in the fourth quarter, Hubbard worked as the inside tight end on the play side on a run to the right. He took down the defender Gilbert was blocking, finding work for himself, before picking up a linebacker, in doing so helping free Bell for 12.

It probably shouldn’t be a great shock that Hubbard’s most significant struggles came working against a high-level right edge rusher, as Vernon was able to get by him in passing situations a couple of times, but other than that, he has handled himself pretty well in this tackle-eligible role.