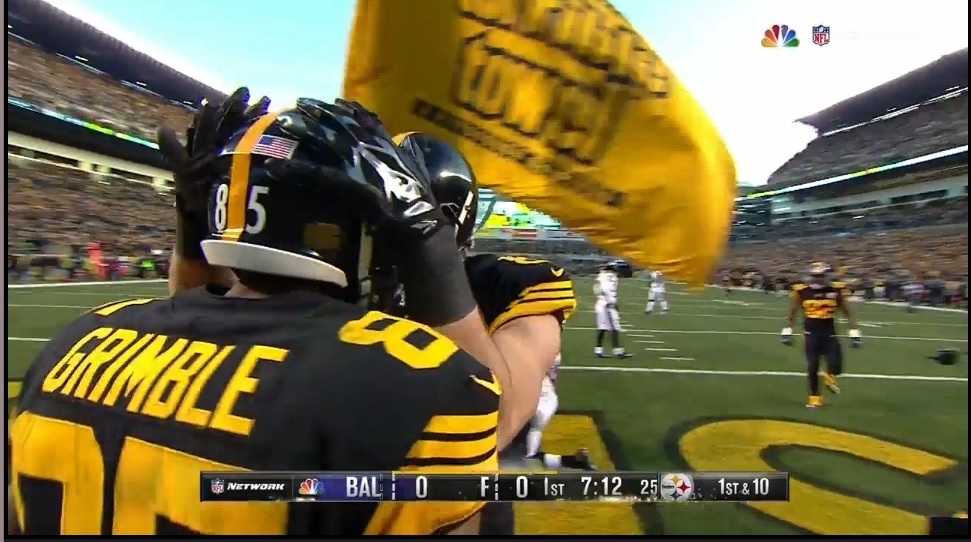 It was weird. And it was spectacular.

– Let’s start with the score, as we always do.

– Pittsburgh had their first opening drive touchdown against the Ravens since 2012 and only the third time under Mike Tomlin.

– Ben Roethlisberger is the first Steelers’ QB to throw an INT within the first two plays of a drive, twice, since Charlie Batch in 2010. But Batch blew out the Tampa Bay Buccaneers that day.

– Since 2012, there has only been six times a running back rushed for over 120 yards and a score against the Baltimore Ravens. Le’veon Bell is responsible for two of those, including today.

– Likewise, only four times since ’12 a receiver had a 10/90/1 line against the Ravens. Antonio Brown is responsible for two of those.

– The Steelers currently have two players with two touchdowns and 11 or fewer receptions, Darrius Heyward-Bey and Xavier Grimble. If that holds, it’ll be the first such pair since the dynamic duo of Jerame Tuman and Jay Riemersma in 2004.

Grimble is the first tight end in team history to have both those touchdowns go for 20+ yards.

He’s the first offensive player period to do it since Quincy Morgan in 2005, who had catches of 25 and 31 yards.

– Cobi Hamilton had his first kick returns since 2010, his second year at Arkansas, when he had eight in a game against Auburn. He had nine his entire football, college and pro, career. None at the NFL level.

– Quarterbacks were 3-8 against the Ravens in the last 11 instances when they threw at least two interceptions. Ben makes it 4-8.

Ben is the first Steelers’ QB to throw at least two picks and beat the Ravens since Tommy Maddox in 2002, who beat them 34-31, in Pittsburgh, on December 29th.

– It’s the Steelers first win this year when having the ball for fewer than 26 minutes. They’ve only had two in the past two seasons, 2015 and 2014.

– Getting an assist from reader Chris on this one to close us out. I liked this stat.

@Alex_Kozora in the 2 ravens games this year, the steelers scored 5 TD's in the 4th quarter. 1 TD in all other 6 quarters combined

– Updating with one more I just found.