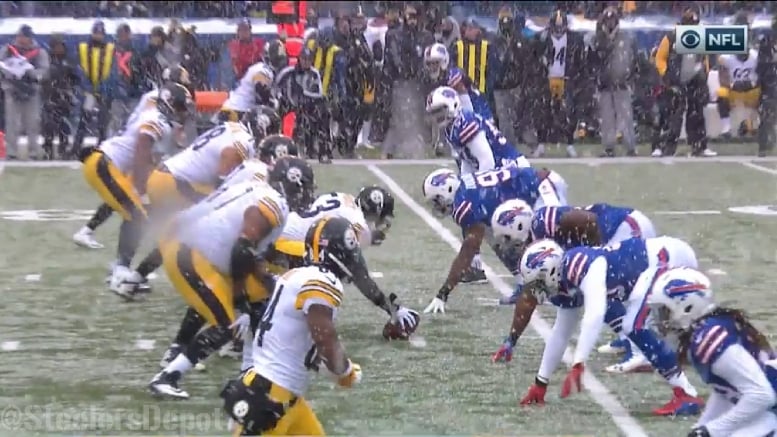 When the New York Giants took down the 17-1 Patriots in 2007, they did so with an outstanding pass rush. But what got them there in the first place was a balanced offense that ran behind one of the best offensive lines in football, and Shaun O’Hara was a key part of that unit.

O’Hara is now working for NFL Network, evaluating offensive line play, and each week he highlights one offensive line in particularly that he believes played the best. You might recall that he previously chose the Pittsburgh Steelers’ offensive line following their blowout victory against the Chiefs in Week Four, in Le’Veon Bell’s first game off of suspension.

The former Giant set his sights on that same line again—and, coincidentally, it was also the second time this season that first-year lineman B.J. Finney was in the starting lineup replacing Ramon Foster. Now, to be clear, when I say coincidentally, I do mean that it is a coincidence. Finney has played well in his two games, but he is not solely elevating the line’s play above what Foster has been contributing. But I digress.

O’Hara took special note of the fact that the Steelers played this game in the elements, writing that “playing in the snow is an offensive lineman’s dream, as the team is likely to run the ball because of the conditions”. He added that he gives credit to offensive coordinator Todd Haley for turning to Bell for 38 carries during his nearly 300-yard game.

While noting that Bell became the first player since Jim Brown to rush for at least 225, gain another 50 through the air, and score three touchdowns all in one game, perhaps the most impressive statistic to the former lineman was the fact that the team had just one play run for negative yardage all afternoon, and that was for a loss of one.

O’Hara utilizes the resources of Pro Football Focus (cue groans), who credit the offensive line with giving up just one hurry the entire game. I would have to assume that this was on second and 10 late in the first half. The Bills blitzed six, including two up the middle, and forced Ben Roethlisberger to ground the ball into the dirt.

But other than that, Roethlisberger was kept clean throughout the game, and none of his interceptions could be fairly blamed for pressure. He was not sacked even once for the third time in the past four games, in addition.

Whenever you have a performance in which the offense puts up 460 yards, gaining over six yards per play, converting third and fourth down efficiently, and rushing for 240 yards while not surrendering any sacks, you have to know that the offensive line deserves a lot of credit for that.

And indeed, the line as a whole probably had one of its best game of the year thus far, both from a holistic and individual standpoint. I certainly think that O’Hara was right to single out the Steelers’ offensive line for this one.