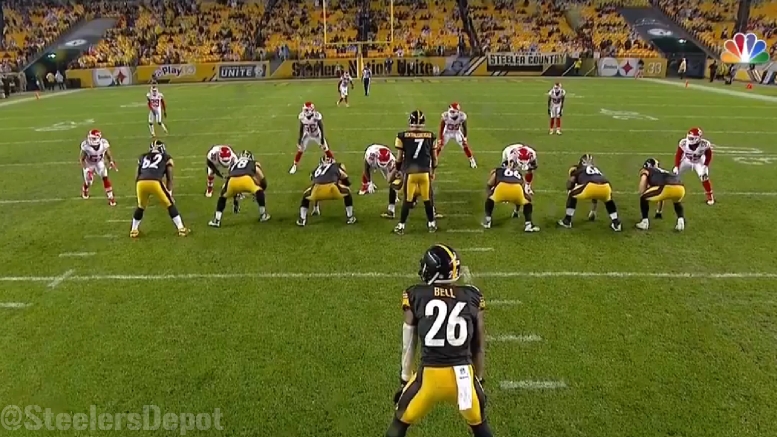 This season, the NFL Network has given former Giants Pro Bowl offensive lineman Shaun O’Hara a weekly column in which he takes a look at the offensive lines that he believes to have performed the best over the course of the previous week. For the fourth week of the season, O’Hara’s choice to put the spotlight on was the line of the Pittsburgh Steelers.

O’Hara talks about how the line, along with the rest of the team, struggled against the Eagles as the backdrop for talking about how well they performed this past week against a Chiefs defense that held the Jets to just three points a week earlier.

While he talked about Le’Veon Bell’s 144 yards rushing and his eight yards per carry, he put a lot of his focus on singling out first-year offensive lineman B.J. Finney, who was making his first career start as an injury replacement against Kansas City.

“Finney did a great job”, he wrote, “along with tackle Ryan Harris, a former Kansas City Chief who came in for starter Marcus Gilbert (ankle) in Sunday’s game”. He notes that Pro Football Focus ranked the Steelers’ offensive line fourth for the week in terms of pass protection, giving up two sacks (one on the quarterback), but few other pressures for the rest of the game.

“The group provided a great pocket for Big Ben on a lot of play-action passes, most of which ended up being big plays. Roethlisberger finished with 300 yards and five touchdowns on 22 of 27 passing”, he wrote.

The line did fare quite well during the game, of course, which was a primary catalyst in the offense’s ability to generate 43 points, though the first two scores were aided by turnovers and short fields, the second drive consisting of one play, a four-yard touchdown pass.

O’Hara also noted the bounce-back efforts of right guard David DeCastro, who played much better after struggling significantly the week before against a tough Eagles defensive front line. He is still not playing at the level that was able to vault him up to first-team All-Pro status last season, but at least he appears to be on an upward trajectory in his play.

Also rounding into form is center Maurkice Pouncey, who of course missed all of last season after suffering a fractured fibula and enduring a number of complications after the injury. Left tackle Alejandro Villanueva may have played his best game of the season as well.

It was Finney, however, who rightly drew most of the attention, not only just due to the circumstances that resulted in him playing, but also based purely on his performance. With the injuries mounting, however, the Steelers’ offensive line is going to have a stiff challenge duplicating their success on Sunday against the Jets’ tough front seven.