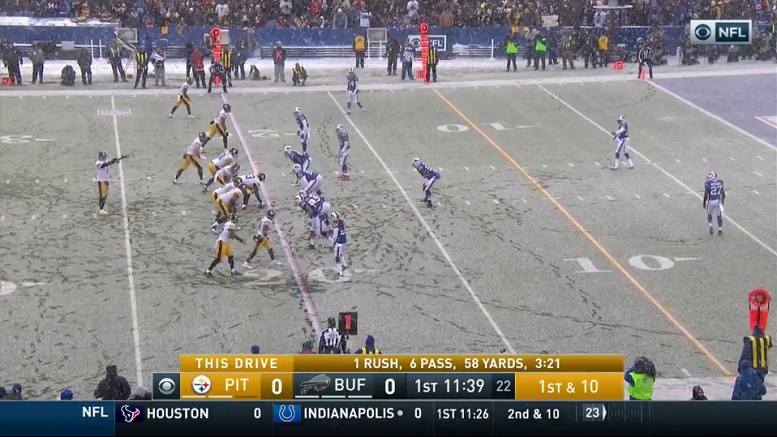 In the Pittsburgh Steelers Sunday road win over the Buffalo Bills the offense opened the game passing the football 13 times while running it just three times during their first two possessions. Eventually, and especially in the second half, the Steelers offense leaned heavily on running back Le’Veon Bell toting the football and his day ended with 236 yards and three touchdowns on 38 total carries.

During his weekly Tuesday interview on 93.7 The Fan, Steelers quarterback Ben Roethlisberger explained why the early plan was to throw the football quite a bit against the Bills.

“We wanted to come out and spread them out and throw it and do some no-huddle stuff and move the ball down the field, which we did,” Roethlisberger said. “I just think that we also saw that we were able to run the ball pretty effectively as well. So, halftime there weren’t any big, ‘hey listen, we’re going to totally abandon this, or go to this, it’s just let’s see what works.’”

During his Tuesday press conference, Steelers head coach Mike Tomlin also explained why the decision was made to throw the football early against the Bills.

“I thought our willingness and ability to spread them out and make them defend the field both horizontal and vertically at the early stages set the stage in terms of keeping those guys off balance and allowed us to run the ball the rest of the way and the rest of the way throughout,” Tomlin said. “We didn’t want to get into one of those static, field position-type games and allow them to use the weather conditions or circumstances against us in that way.”

Even though the Steelers offense threw the football a lot more than they ran it early against the Bills, it was working. In fact, had Roethlisberger not thrown his first of three interceptions during the opening drive, the first three offensive possessions would have likely ended in touchdowns.

“We don’t care how we move the ball this time of year,” Tomlin said. “I thought we possessed the ball, I thought we had yards, I thought the possession of the ball and the yards produced points and that gets us out of the stadium with wins.”

During the second half, it was all Bell as Roethlisberger only attempted five total passes.

“We came out in the second half and wanted to keep the running game going and it just kept working, Roethlisberger said Tuesday. “And why try and fix something if it’s not broke, so we stayed with the run and it worked out really well, especially for Le’Veon.