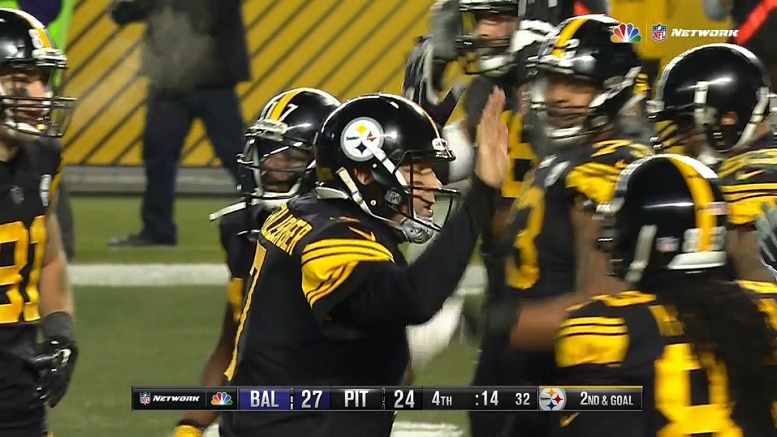 Pittsburgh Steelers quarterback Ben Roethlisberger didn’t play great for most of the team’s Sunday win over the Baltimore Ravens but he managed to rebound in the fourth quarter in a big way. Because of his late game-winning scoring drive, the Steelers captured the AFC North crown and eliminated the Ravens in the process.

After the game was over, Roethlisberger was asked if he thinks his team is playoff-ready.

“I think today showed some resolve,” Roethlisberger said. “I showed some fight, no quit. When you throw that second pick and they’re in the red zone already, you never heard anything from defense, you never saw them get down, you never saw them complain about the offense. We just always stick together. Same thing when they scored late. We don’t point fingers at each other. This is a total team win and even special teams blocking a field goal, whatever it was, just awesome.”

During the Steelers four-game losing streak that they went through during the first half of the season, Roethlisberger very publicly challenged a lot of teammates to be better. Because of that, Roethlisberger was asked after Sundays win over the Ravens if he feels this year’s team has the strongest imprint of him on it.

There’s no doubt that this is Roethlisberger’s team and it’s been that way for several years now. It’s now up to him to continue leading Steelers deep into playoffs and ultimately a seventh championship.