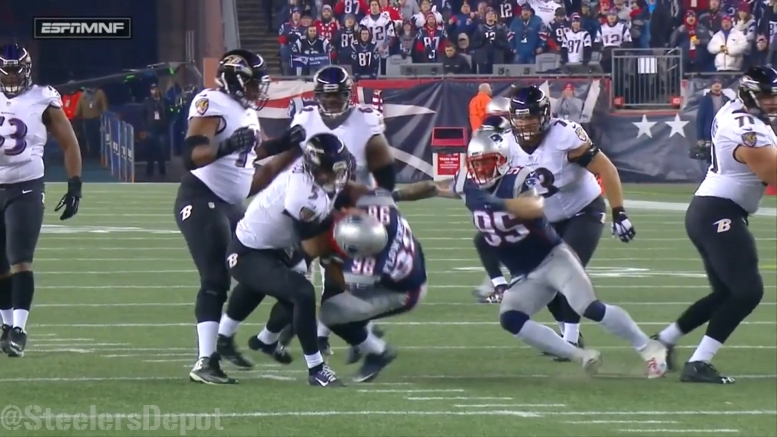 Last night, the Baltimore Ravens headed into Foxboro to take on the Patriots, and in doing so, they lost their lead on the AFC North division. But they did not lose control of their own playoff destiny. As with the Pittsburgh Steelers, if they are able to win out through their final three games, then they will win the division, and they will find themselves in the playoffs.

The Steelers do have the advantage of now having a free game in hand to lose, if need be. If they are able to come out of Cincinnati next week with a win and then beat the Ravens at home on Christmas Day, then they will win the AFC North, since they will guarantee that they will finish the season with a better record than the Ravens.

Of course, the last game of the season is against the Browns, who have failed to find even one win in their first 13 games, which is just the eighth time that has happened in NFL history. But the Steelers could still drop the game against the Bengals and wrap up the division with victories over the final two weeks of the season.

The Ravens, meanwhile, play host to the Eagles, who have now lost their last four games, and six of their last seven, since opening the season with a 3-0 record. They have gone 2-8 over the span of the past 10 games, but they were close on Sunday, holding a late lead against Washington before the defense surrendered a touchdown with two minutes to play. The offense got to the 14-yard line on the ensuing drive before suffering a strip sack with 14 minutes to play.

They would seem ripe for the picking for the Ravens, who are certainly hoping so after the night that they just went through. Following early blunders, including a safety and a blocked field goal attempt, they were able to get back into the game due to two special-teams fumbles by the Patriots in the third quarter that made a 20-point lead a six-point one.

Both of Joe Flacco’s touchdown passes came on drives that began inside the Patriots’ 25-yard line, with the first one actually coming from the three-yard line. The Ravens were only able to muster up a pair of field goals drives on the offensive side of the ball outside of those two short drives created by special-teams turnovers.

The Patriots offense, overall, handled the Ravens defense better than nearly anybody else has this season, even with the injuries that they have dealt with. New England put up 30 points—two by safety—and just under 500 yards of offense, averaging 7.6 yards per play.

LeGarrette Blount had fair success on the ground, rushing for 72 yards on 18 carries, including a touchdown from one yard out, and he also secured the victory with a first-down run on fourth and one. Add in a 50 percent success rate on third down, and you have the blueprint for what the Steelers need to do in two weeks.