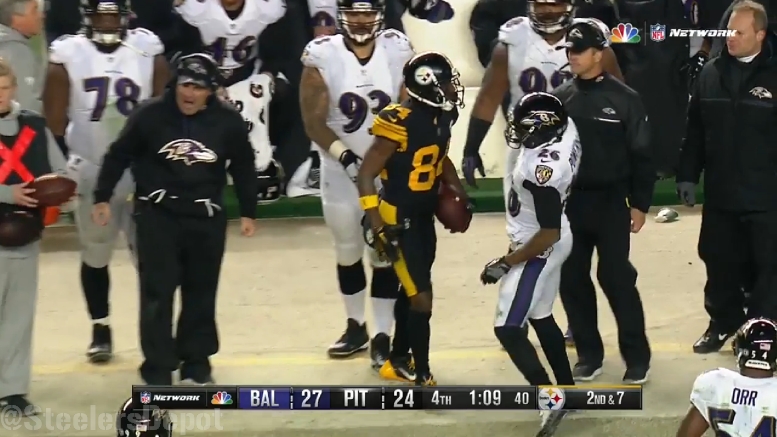 Over the span of the first three quarters on Sunday, the Baltimore Ravens defense held the Pittsburgh Steelers to just 10 points—and seven of those points came on the opening drive. From that point all the way until the fourth quarter, it was the Ravens having their way with the Steelers. But the dam broke in the fourth quarter as the Steelers’ offense came back with three touchdowns in the final frame, including the game-winning touchdown in the two-minute offense.

Unfortunately for the Ravens and defensive coordinator Dean Pees, that’s been nothing new, and, in fact, it has been their biggest problem all season. In fact, Baltimore’s defense has had a history of struggling late.

“The problem that we’ve had this year is finishing”, Pees told reporters yesterday. “Our two-minute has been what’s not been good. It hasn’t been for whatever reason. Sometimes we’ve played zone and gotten hurt. Sometimes we’ve played man like in the Giants game and we run into each other and they go”. In that game, of course, Odell Beckham, Jr. had a long go-ahead touchdown late in the fourth quarter beating man coverage when two defenders collided.

“In this game we actually pressured Ben. But the problem is when you pressure Ben and he gets out on you, now you’ve got a problem. And that’s exactly what happened in that two-minute at the end. As we pressured him the first two plays, the second play they get out of bounds so they don’t have to use a timeout or anything; we miss a tackle. And then twice we pressure him and he gets out, and when he gets loose like that, you know, you’re gonna have a tough time in coverage, and that’s what happened.”

He is right about that. On the first five plays of the Steelers’ final drive, the Ravens ran some sort of blitz on each one, with three of them bringing an extra rusher.

The veteran defensive coordinator believes that his defensive unit lacks confidence in late-game situations because of the struggles they’ve had in those situations. “I just think we’ve got to grow through that and become a confident team, and the only way to become confident in anything you do is have success”.

“When the game’s going good and everything’s rolling good and we’re getting calls, we’re confident”, he said. He cited the past two weeks against the Patriots and Eagles. “What happened in New England? We get right back in the game and we give up a big play for a touchdown and they’re right back. The Eagles. What happened in the two-minute there? We made a play at the end, but prior to that, they moved the ball down on us”.

Pees said that he can even sense from his defense at times that they are playing to be the one to not give up the big play. “You can’t be that way”, he added. “You’ve just got to let it go. I can’t be that way as a signal caller either. I told that before we went out in that two-minute on Sunday. I said ‘we are not sitting back here and playing four-man rush and coverage all day, we’re going to go get this guy’”.

His plan was to “make [Roethlisberger] throw the ball quick, which he did, the first two plays. Then all of a sudden he gets out of bounds and everybody gets a little like, ‘oh man, the pressure’s not working’”.

“You just can’t play that way” he concluded, once again. “We’ve got to grow through that. We’re a good defense, but that’s what’s keeping us from being a great defense”. Here’s to hoping that doesn’t happen any time soon.