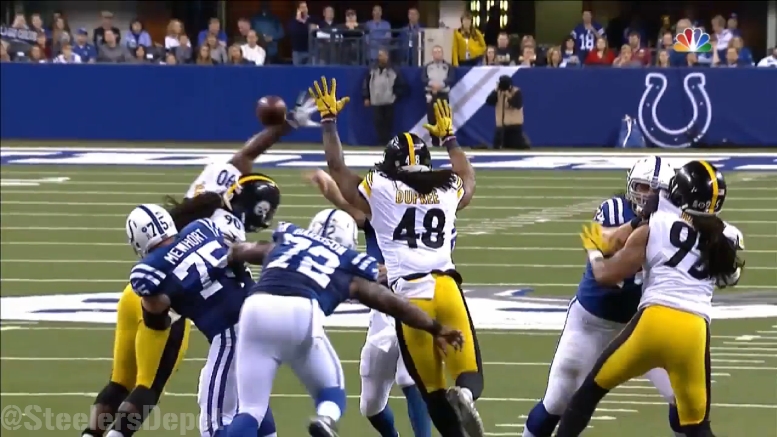 One thing that we have already learned earlier this week was that Pittsburgh Steelers Head Coach Mike Tomlin was not interested in continuing with a five-man rotation at the outside linebacker position. He said as much during his weekly press conference. According to Jacob Klinger, however, that was what he told his linebackers when Bud Dupree came off of injured reserve and played one snap in his first game.

And it would seem that that five-man rotation is likely to end, or at least hasten toward its end, starting tomorrow against the Giants—with former first-round draft pick Jarvis Jones evidently being the odd man out, as Klinger writes that Arthur Moats confirmed to him that he has been the primary player taking snaps behind James Harrison on the right side.

Jones has actually played more snaps than anybody else at the outside linebacker position up to this point in the season, and leads the position in terms of tackles, but he is also the only one, other than Dupree, who has played only a couple dozen snaps, without a sack.

The 2013 first-rounder was recently demoted from the starting lineup a couple of games ago, in part because he was blamed for being out of position on a long touchdown run against the Cowboys, with Harrison moving into the starting lineup.

The Steelers look to be going ahead with Harrison and Dupree as their starters and Moats and Anthony Chickillo as the two primary rotational players. While all four are capable of playing on both sides of the field, Moats in particular has the most experience doing so, and Chickillo moved to the right side a fair amount in the last game.

What should be worth noting is that the group expects there to be no animosity or hard feelings about who is getting on the field and who is not. Dupree told Klinger that the outside linebackers are a close-knit group that supports each other on and off the field. The success of one is success for the entire group.

Harrison, of course, tends to be the outlier, as he has previously said that he would like to play every snap, and that as a competitor, anybody should want that, and that he doesn’t believe that he needs the time off that the coaching staff is giving him. But of course, he is also playing the best out of the group.

With it looking line the rotation lineup of Dupree and Chickillo on the left side and Harrison and Moats on the right side gradually settling over the course of the week, the group believes that nobody is taking it personally.

“The thing about it is nobody’s really tripping”, Dupree said about the situation. Of course, the one who should really be ‘tripping’ is Jones, who appears to be the one getting the shortest straw. He may see some playing time—perhaps even in a three-outside-linebacker package—but it figures to be highly limited.