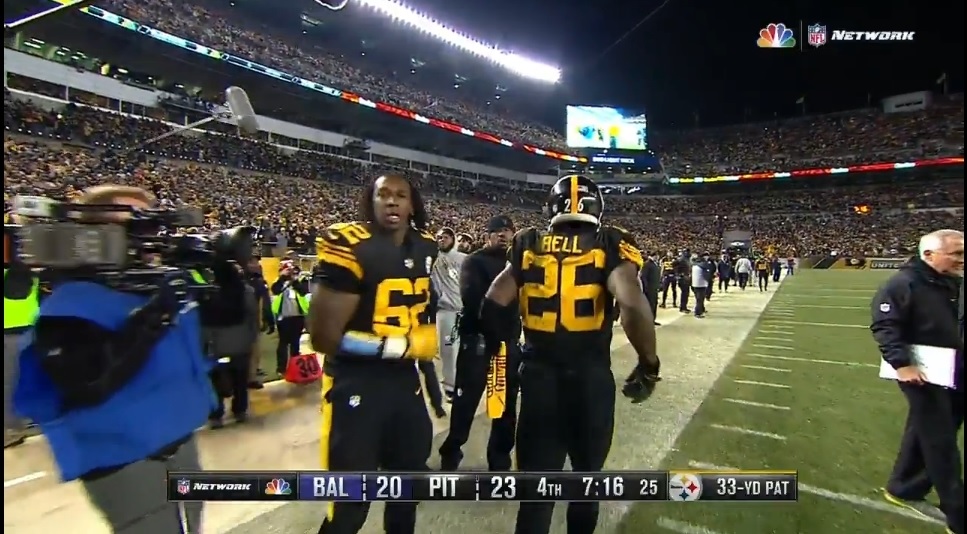 Late in the game, the Pittsburgh Steelers needed somebody on offense to step up in the game and deliver, and they turned to their All-Pro running back to do so. While Le’Veon Bell got off to a good start on the ground in the beginning of the game—he had 60 rushing yards on his first nine carries—his game just seemed to be at another level in the fourth quarter.

And it started with the final play of that first drive in the quarter, because he had only one touch on the opening drive prior to that, and it was a rush for a loss of two yards. But he ended that drive with a seven-yard touchdown on what initially looked to potentially be a busted play.

Out of the backfield, there was some miscommunication between Bell and quarterback Ben Roethlisberger on the play, and the exchange was only barely made. Bell bounced the run out to the left side, and thanks to a couple of key blocks from his wide receivers, was able to punch it in from seven yards out on the ground and get the Steelers back into the game, at that time down three.

After the Steelers forced a three and out, the offense went on a 90-yard scoring drive on which it was all the Killer Bs, with Roethlisberger finding Antonio Brown for plays and Bell handling the rest. In fact, he got the drive started by breaking free for a 23-yard run off the right edge to the 33-yard line that ignited the momentum that carried them all the way into the end zone.

Two plays later, the fourth-year back picked up 13 yards between the tackles for another first down. After a pair of catches from Brown put the Steelers on the seven-yard line with first and goal, Roethlisberger was able to extend the play and find Bell coming free underneath, who muscled his way into the end zone for his second touchdown of the game.

It was unfortunate that the Steelers needed to marshal themselves for one final drive on offense in order to win the game, after the defense broke and allowed the Ravens to get the go-ahead score with under 90 seconds remaining, but they did come back and win it, and it is sort of amazing to think that Bell did not even touch the ball on that drive. Of course, they weren’t running the ball.

It was  Brown who stepped up on that final drive—among others—reaching over the goal line toward destiny for his 12th touchdown of the season, and perhaps the most important of his career. It clinched the division.

As for Bell, he finished the game with 20 carries for 122 yards and one rushing touchdown, adding three receptions for 15 yards and another touchdown. that gave whim 137 yards from scrimmage with two touchdowns on 23 carries in the biggest game of the season. Not bad.