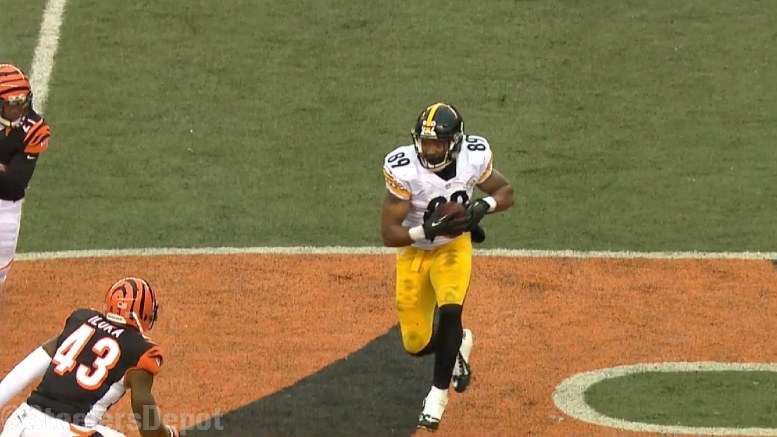 I just talked about the big impact that the Pittsburgh Steelers offense was able to get late from slot receiver Eli Rogers, who posted five catches for 75 yards and the go-ahead touchdown that proved to provide the margin of victory, but he wasn’t the only one outside of their Killers Bs to provide the offense a critical lift when it was needed most.

Tight end Ladarius Green, the man they paid $20 million over four years to come into this offense and become a big contributor right away, spent the first half of the season on the Physically Unable to Perform List, but he has been incrementally working his way into a full-fledged contributor since then.

Earlier today, he had his second-best showing thus far and made some big catches for the offense, only to be outdone by his career day against the Giants, in which he caught six passes for 110 yard and a touchdown.

Green did not quite match that stat line, but what he did come up with was more than respectable, with five receptions for 72 yards, and he vastly outperformed his counterpart, as Bengals Pro Bowl tight end Tyler Eifert, who had been especially effective in recent weeks, was limited to just one reception for nine yards

Once again, some of Green’s catches were not only big in terms of their context in the game, such as converting on third down, but also big in terms of the distance that they traveled. Two of his five receptions were explosive plays, which gives him seven such receptions on the year—and in the past four games—out of 18 total receptions.

Early in the third quarter, Green got the Steelers out of a major jam after they were faced with a third and 17, a consequence of a 15-yard unnecessary roughness penalty that made a third-and-two play a lot more complicated. Ben Roethlisberger was able to find him working down the right sideline, lined up by the boundary as a wide receiver. The cornerback bailed on initial coverage and Roethlisberger found him in between zone shifts for 23 yards. The drive ultimately produced a field goal.

Late in the game, with the Steelers trying to close things out and holding a four-point lead, it was Green coming up again on third down, this time on third and eight. This time he came down the seam from the right slot, once again slipping in between three defenders in a zone.

Unfortunately, it was his last play of the day after he took on a head-on collision with safety George Iloka on the end of the 28-yard connection. He looks to have had some contact with his head to the ground as well, leaving the game to be checked for a concussion.

Green caught three other passes on nine total targets, including a five-yard reception on third and five as he continues to be a bigger part of the offense. Given his concussion history, however, this could be pretty concerning.