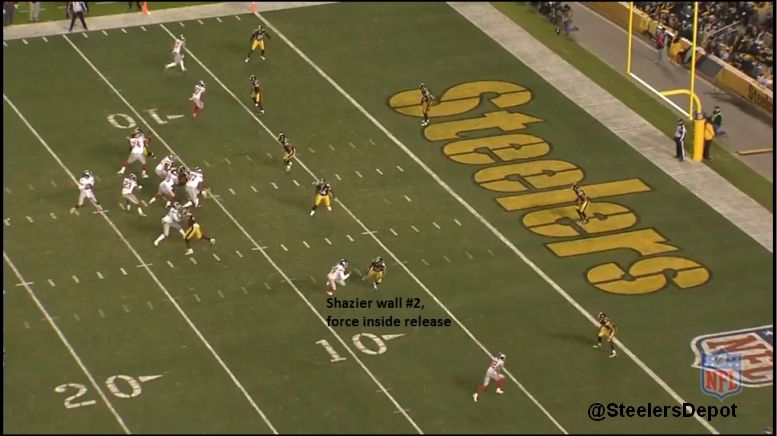 It’s a coincidence but it’s a fun one, worthy of the stats of the weird variety. Week 13 has been kind to the Pittsburgh Steelers the last two years. Two immobile quarterbacks, two red zone interceptions on the same coverage.

Though it may be frustrating to see Keith Butler send only three on certain downs, there’s usually a good reason behind it. It’s run against unathletic quarterbacks, ones who prefer to hang in the pocket, lessening the issue in having strong rush lane integrity. And he’s run it in the red zone to tighten up already difficult throws, restricted by the back of the end zone, to force the quarterback to be perfect.

Sunday afternoon, Eli Manning was not perfect. A year ago, neither was Matt Hasselbeck. And the result was the same. A leaping interception by a linebacker.

In both scenarios, the Steelers did the same thing. Three man rush, drop eight into coverage, and play Cover 4. Cover 4 is a “quarters” coverage with each deep quarter of the field taken away by a DB so nothing vertical is available, the sideline or the seam. It’s usually a three man zone coverage underneath but with the Steelers dropping eight, they can play four under and take away every window, the flats and the hook zones.

Here it is against the Indianapolis Colts in Week 13 of 2015. 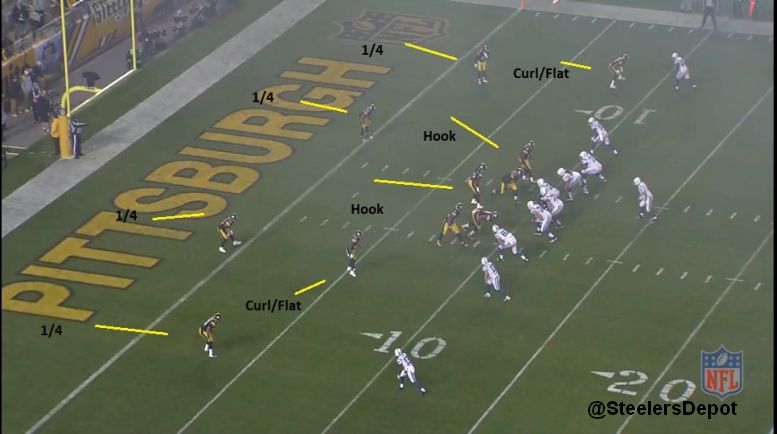 And here it is Sunday. 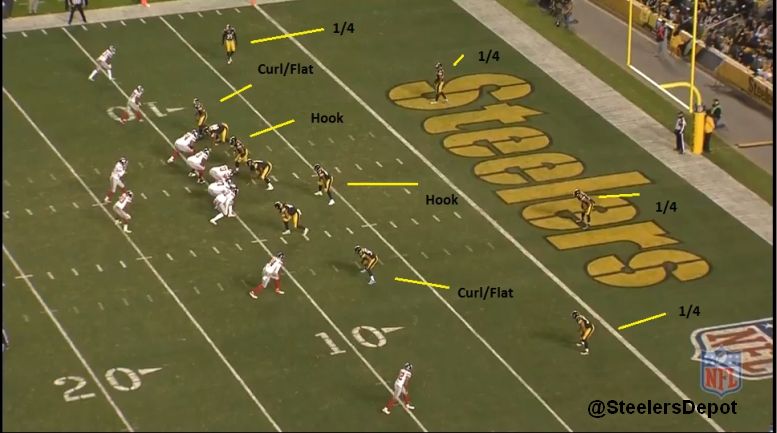 Last year, Hasselbeck isn’t going to take off so he’s forced to throw. There’s nothing available for him and he tries to force the ball down the middle where Jones reads it, leaps, and picks it off. 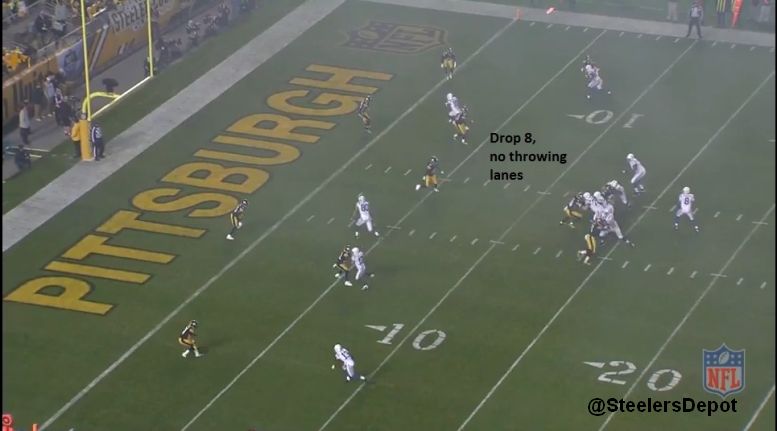 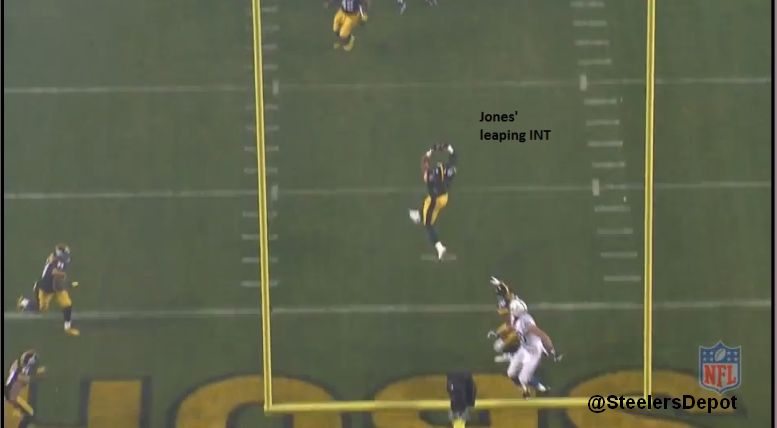 Fast forward to Sunday. There’s a little more for me to explain here. Ryan Shazier plays a key role in Lawrence Timmons’ interception. He has curl/flat responsibility and widens once he gets his pass key. He walls off the TE, Larry Donnell, and reroutes/forces him inside. 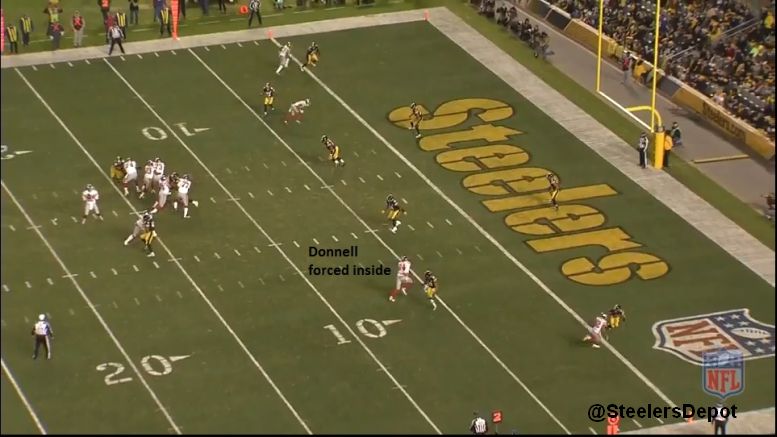 This creates less ground for Timmons to need to get to to take away the seam throw by Eli Manning. And he makes a great player, reading Manning’s eyes/front shoulder, getting depth, and making a heck of a play. 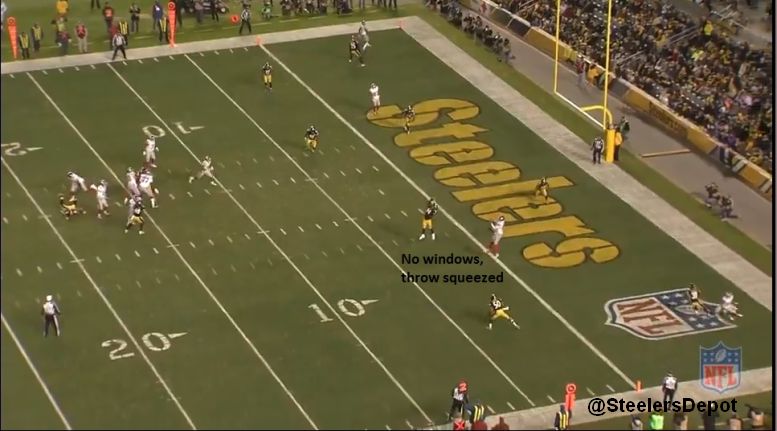 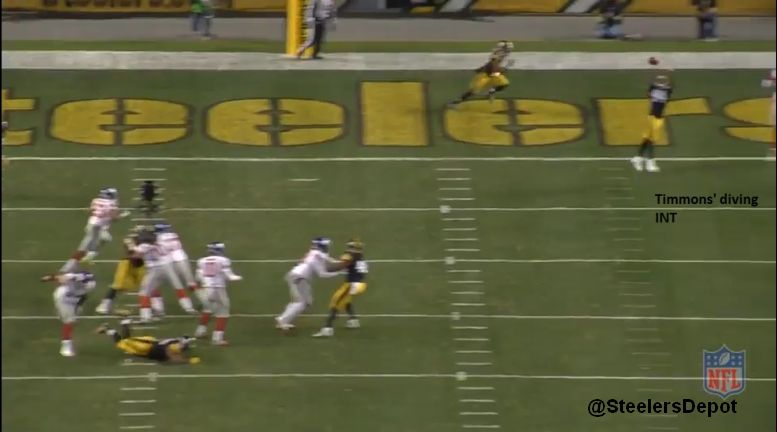 I’m a proponent of using dime packages more often and taking Timmons off the field but he’s done an overall good job in coverage this year. It isn’t always seen, which is how good coverage is supposed to be seen, and yes, he’s lost a couple matchups, but he’s winning with his IQ and a skillset that hasn’t fallen off yet.

That doesn’t mean he’s going to return next year, the old saying is to let a guy go a year early than a year late, but he is a key piece to the Steelers trying to make their Super Bowl run in 2016.