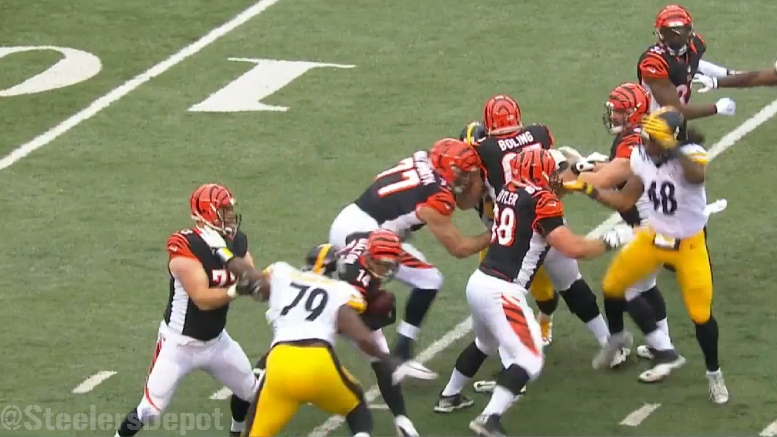 Sunday’s game against the Baltimore Ravens will undoubtedly be the biggest football game that Pittsburgh Steelers rookie Javon Hargrave has played, at any level, in his life, up to this point. Obviously, it goes without saying that the game itself has major ramifications for the Steelers’ potential postseason, but in this particular game, he could be tasked with becoming the team’s top defensive lineman.

Of course, he spent much of the last game in that role, since third-year veteran Stephon Tuitt suffered a knee injury on the third snap of the game, but, should Tuitt be unable to go on Sunday, Hargrave will have to shoulder the load in a big way against a strong Ravens interior offensive line.

He was already playing a bigger role, of course, due to the season-ending injury that put Cameron Heyward on injured reserve five games ago, but if both Heyward and Tuitt are down, Hargrave may not even come off the field.

We did get a good look at Hargrave and Tuitt together on the play before the latter was injured. On the second play from scrimmage, the Bengals tried to run the ball up the middle against a nickel front. With Cincinnati blocking Hargrave with just the center, he was able to hold up at the point of attack and come off to join in on the tackle with Tuitt after a one-yard gain—even if he wasn’t officially credited with an assist on this play.

Now, I will be the first to admit that he still is not a finished product. After all, he is a rookie, and a product of a small school, at which he got by almost purely through his natural abilities. He is still learning how to use his hands and keep his shoulders square. He can be taken out of the play every so often, as happened later on during that opening drive, starting with a double team that ended with the left tackle sealing him.

Toward the end of the first quarter, when the Bengals were threatening to score from the one-yard line, the Steelers put in their goal-line package, in which they essentially use a pair of one-tech nose tackles. Hargrave was on the defensive right side on the third-down play, and he did a nice job of playing stout at the point of contact and holding up the center, which helped to keep the defenders clean behind him, with Lawrence Timmons able to slide to his left to hit the gap and make the play.

The rookie nearly had himself his third sack of the season later in the game, but the quarterback actually showed some nifty footwork to escape the quick defensive tackle.

On a second-down play, Hargrave, lined up over the right tackle, worked outside on a tackle-end stunt. When the quarterback starting to scramble, he began to work inside and got a hand on the quarterback, but he was able to spin away and ended up making the throw.