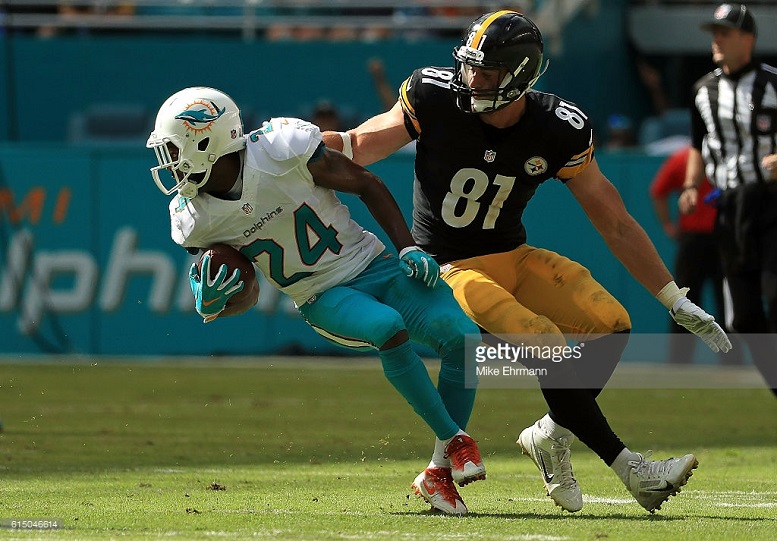 While it’s probably still a bit early to look ahead to who the Pittsburgh Steelers might play in the Wild Card round of the playoffs, you can’t help but think it will ultimately be the Miami Dolphins, who need a few things to go their way in Week 17 in order to avoid playing at Heinz Field.

Not only do the Dolphins need to beat the New England Patriots in Week 17, they’ll also need the Kansas City Chiefs to lose to the San Diego Chargers as well in order to get a first-round date with the Houston Texans. By the way, both the Patriots and Chiefs have something to play for in week 17.

Assuming the Dolphins enter the playoffs as the No. 6 seed in the AFC, they’ll have to face the Steelers on the road without another one of their starting safeties as Isa Abdul-Quddus was placed on the Reserve/Injured list Wednesday morning. If you remember, the Dolphins lost their other starting safety, Reshad Jones, for the remainder of the season during their win over the Steelers back in Week 6. In that game, both Abdul-Quddus and Jones recorded interceptions.

Looking ahead to the Dolphins Week 17 game against the Patriots, Miami will more than likely start safeties Michael Thomas and Bacarri Rambo so it will be interesting to see how those two play against New England.

While he isn’t likely to play against the Patriots due to a knee injury that he suffered a few weeks ago, Dolphins quarterback Ryan Tannehill might be deemed healthy enough to play in the first-round of the playoffs. However, if that ultimately happens, his mobility outside of the pocket is sure to be limited. Should Tannehill not make it back for the Wild Card round, veteran backup Matt Moore will remain under center for Miami.