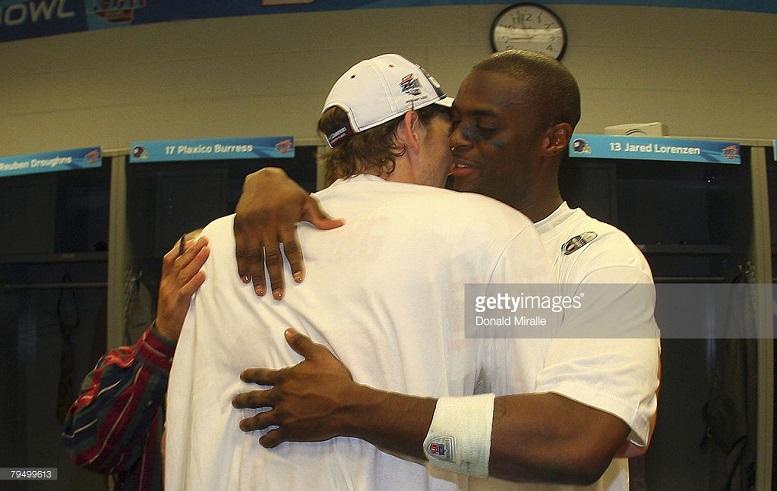 The Pittsburgh Steelers will host the New York Giants on Sunday and that means we’re set to see another matchup between 2004 draft classmates, quarterbacks Ben Roethlisberger and Eli Manning. One former wide receiver who knows both quarterbacks very well, Plaxico Burress, was a guest this week on ESPN’s ‘First Take’ and he was asked to give his thoughts on how he views both players.

“I’ll say this, when Eli Manning was drafted, there was kind of an expectation level. When Ben Roethlisberger was drafted into Pittsburgh, nobody foresaw the career that he’s having now,” explained Burress. “And now both of these guys are two-time World Champions, MVPs of that nature, and I always say, Ben goes out and gets the job done, he wins ugly. They don’t really criticize him as much as Eli being up here in the media market (New York). But having played with both of them, they basically have identical stats, identical numbers, you really can’t say right now who is having the better career.”

Later during his interview, Burress was asked which quarterback he’d rather have on the field trying to get him the ball if all the chips were on the line.

“I love both of these guys,” Burress said. “They’re great quarterbacks, two future Hall of Famers and I’ve done it with Eli on that stage, so I know what he’s capable of doing. And also Ben Roethlisberger, but I’m going to go with No. 10 because I know he’s going to put it up there in a nice spot for me to go up there and get it. And he’s going to give me that wink, or that signal, or he’s going to grab his facemask, or pat his thigh, or pat the side of his helmet and give me the signal for the best route for me to get open.”

It’s probably not surprising that Burress chose Manning over Roethlisberger being as he won his one and only Super Bowl with the Giants quarterback. Additionally, while Burress played his first four years in the league with the Steelers, he never played the equivalent of a full season with Roethlisberger as the starter.

While Burress did choose Manning over Roethlisberger, when asked to choose between Antonio Brown and Odell Beckham Jr., he went with the former.

“I just look at the body of work of what these two guys are doing, I just shake my head. But if I’m going to take one wide receiver right now with the consistency, I’m going to go with Antonio Brown,” Burress said,

When pressed further as to why he chose Brown over Beckham, Burress had this to say.

“I had a great opportunity of playing with Antonio Brown my last years in Pittsburgh, 2012 and 2013, and just to get to practice and watch the way that this guy works, and when you see the results on Sunday, you know where they come from because you witnessed it firsthand,” Burress said. “So, I’m just not going to jump out on a limb and say Odell Beckham Jr. is a better talent, I’m just going to go with what I see and what I know personally. What I saw with my own eyes being there two years and watching what he does every Sunday, I’m going to go with the consistency because I know what I’m going to get every Sunday from Antonio Brown.”

So, who does Burress think will ultimately win Sunday’s game between the Steelers and the Giants?

“I’m going to go with the New York Giants for this reason, I believe the defense is playing better,” Burress said. “JPP [Jason Pierre-Paul] is kind of getting back to his old self. Landon Collins is no doubt the MVP of that defense, probably of the team and with the Dallas Cowboys coming in next week I think it’s a great barometer for the New York Giants to go out and make a statement game.”