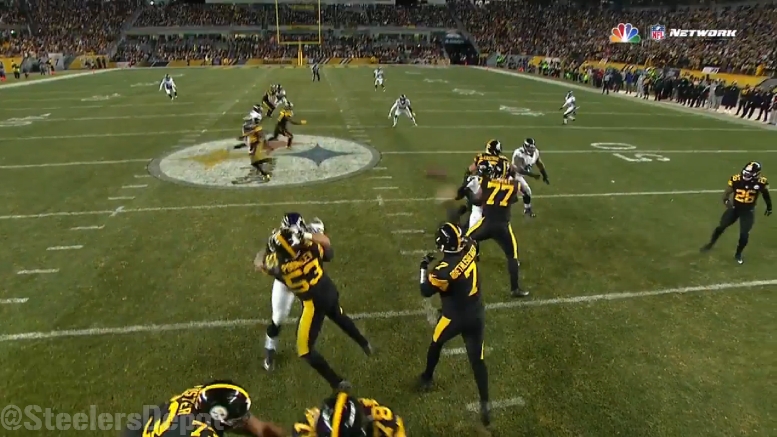 Last night, I talked about the rough third quarter that Pittsburgh Steelers quarterback Ben Roethlisberger put together. He threw two interceptions in the opening frame of the second half, both of them on poor throws, and both of them led to points for the Ravens. Baltimore netted 11 points in total off of the two turnovers, mistakes that could have easily been avoided.

I focused on that period because, quite frankly, that was what was happening at the time that I began writing. You see, yesterday was Christmas, and I was preoccupied with the usual Christmas things that tend to require people’s time. You may have noticed that I was not around to do the live updates for the game yesterday.

But I got home just in time to begin writing about Roethlisberger’s poor third quarter knowing that Christmas obligations would pull me away soon after the game, which meant that I had to pick up on trends in the game to write about as it was happening, pending the result.

Quite frankly, I didn’t expect Roethlisberger to have anything like the third quarter that he had. It was simply a remarkable performance from a remarkable player, stepping up at the absolutely most critical juncture of the season to rally his teammates and put together an improbable comeback.

It was just a little over a week ago that we talked on this site about how Roethlisberger had already secured for himself a non-losing record without even having to author a comeback or a game-winning drive. Naturally, as soon as we wrote about that, he has had two in the past two games—hell, he had two in yesterday’s game, if we’re being honest.

In the third quarter, Roethlisberger completed four of seven passes for 55 yards and two interceptions. They ran three drives in the quarter, with the first drive lasting one play before he threw his first interception. The third drive ended just two plays in with yet another interception.

The fourth quarter? Statistically, it was a little bit better. It started with a 21-yard pass to his tight end, and also hidden in there was 35 yards of penalty yardage on a go route that drew a pass interference penalty necessitated by his great throw that put the cornerback in a trailing position.

Over the course of the fourth quarter, leading a trio of touchdown drives, Roethlisberger was nearly immaculate. Ignoring a pair of spikes on the final drive to stop the clock, he completed 14 of 15 pass attempts for 164 yards and two touchdowns—plus 35 yards from the pass interference penalty.

Now, credit must be given to his receivers on those two touchdowns. In both cases, the recipients—Le’Veon Bell on the first go-ahead score and then Antonio Brown on the game-winner—displayed excellent individual efforts to drive themselves into the end zone for their respective scores. In the case of the latter, failure to do so may have resulted in the end of the game, and defeat.