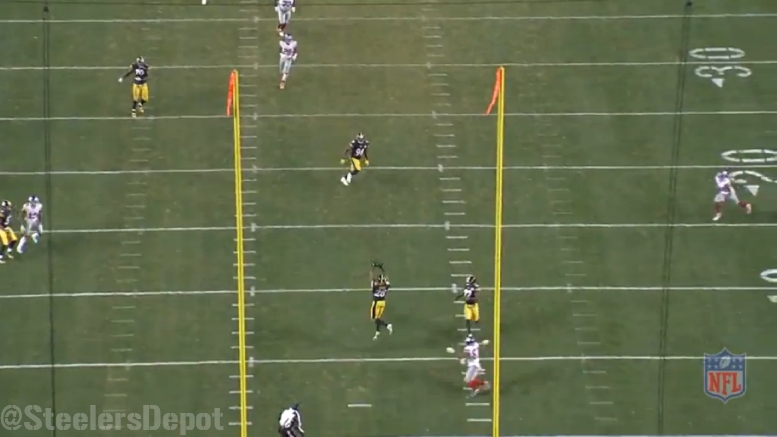 Question: Should rookie Sean Davis have batted down the pass that he picked off for the first interception of his career?

Toward the beginning of the fourth quarter, the Giants were beginning to drive while down two scores. They were able to reach the Steelers’ 30-yard line when the drive began to stall, and they ended up facing a fourth and 13 from the 35.

On the play, the Steelers pressured the quarterback and flushed him out of the pocket, forcing him to heave a pass awkwardly across his body, where Davis was in position to pick the pass off. He secured it at the six-yard line and returned it 41 yards to the 47-yard line, but a penalty on Artie Burns wiped out the return and put Pittsburgh at the three.

Now, obviously, had there not been a penalty, the Steelers would have gotten to the 47-yard line because Davis chose to intercept the ball rather than bat it down, which gave them a net gain of 12 yards. But there was a penalty, so that set them back to the three, a net loss of 32 yards, since they otherwise would have had a turnover on downs at the 35.

To my mind, there are two factors to consider here. The first is whether or not Davis had a realistic expectation upon examining the field that he would be able to improve the team’s field position. From the All-22 view, that looks to be a possibility.

The other thing to consider is the intangible worth of recording your first interception. Davis has had an opportunity or two earlier in the year to pick off a pass that he spoiled. Getting one under the belt has value that can’t be measured in field position.