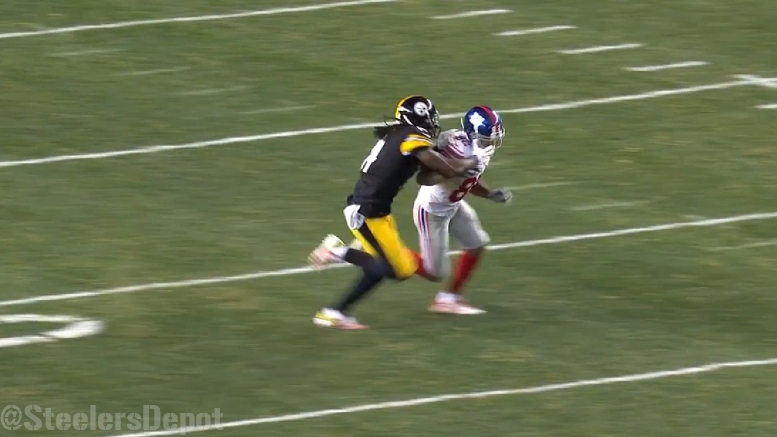 Question: How concerning are the continued penalties that the Steelers have made a habit as the season has progressed?

Through 12 games, the Pittsburgh Steelers have now had 86 penalties accepted against them this year after adding an absurd 12 penalties against them facing the Giants yesterday. The accumulated penalties cost them a total of 115 yards, which needs to be taken into consideration when you look at New York’s 234 total yards of offense on the day.

The penalties started on their second drive, though I will only highlight the more costly ones. A hold on a first-and-10 play negated a 12-yard run by Le’Veon Bell. The Steelers were forced to punt three plays later, after surviving a false start earlier on the drive.

Early in the second quarter, the Giants got a free play for an offside penalty, which resulted in a deep target on which Ross Cockrell committed a defensive pass interference penalty worth 15 yards and put the ball at the Steelers’ 41. Had New York sabotaged that drive with a penalty and then a red-zone interception, that could have been a much bigger deal.

There are plenty of penalties on special teams, the biggest being a facemask penalty on Sammie Coates that negated good starting field position following a punt. The Steelers opened that next possession with a holding call that gave them first and 20 from the 13, and they punted three plays later.

Earlier, an offensive pass interference on Ladarius Green wiped out a third-and-seven conversion, but the Steelers got a break in converting the eventual third and 17 and ended up with a field goal.

An illegal block call on Artie Burns after an interception negated a 41-yard return to the 47-yard line and put the Steelers on their own three. The Giants’ final scoring drive began with an unnecessary roughness penalty and ended with a pass interference in the end zone.

Maybe it’s still just popcorn, but it’s a whole bag of popcorn. The Steelers have been saved in recent weeks by their opponents shooting themselves in the foot. Despite their record, the Giants have not been a heavy hitter. The Steelers imply cannot sustain this level of ill discipline against a truly strong opponent—such as the teams they may face in the playoffs.