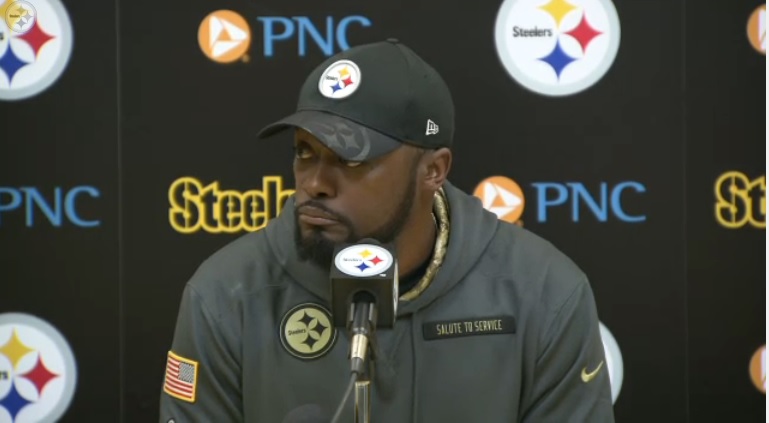 There’s been quite a bit of talk about lack accountability and discipline from several Pittsburgh Steelers players over the course of the last few weeks and during his Tuesday press conference, head coach Mike Tomlin was asked to address it.

Tomlin was asked if he feels his team is accountable and disciplined and if not, is there anything he can do to fix it.

“It’s less about feeling and I think that that’s what’s being relayed by the locker room,” stated Tomlin. “It’s more about what’s tangible and what’s on tape and the tape says we’re not disciplined enough. The tape says there’s not enough people doing the right things on a consistent basis to produce victory. So, we have to make an accounting of that. We’re a very transparent group.

“We’re not be as downtrodden as we seem, but that’s because we speak truth. We speak truth opening among ourselves. We work to speak truth to you guys. We’re not comfort-seeking in terms of the things that has produced our record. It is what it is. We’re not doing enough of the good things well enough to win on a consistent basis. We’ve got to change that. Part of changing that is first acknowledging that and those are some of the sentiments that are being relayed to you and that you are sensing and feeling about our present state.”

Tomlin was later asked why he thinks it is some of the details are lacking as the team prepares to play the Cleveland Browns this coming Sunday.

“We’re just not playing well enough,” said Tomlin. “We’re not in the right place enough. We’re not looking at the right things enough. We’re not finishing plays emphatically enough and I think it’s all interrelated. When you know what you’re doing and you understand what it is that you’re doing in great detail, and you understand how it fits into the larger picture of things, it makes you act quicker. It makes you act more fluidly. It allows you to have the type of detail that maximizes opportunities when presented. Tipped passes don’t fall innocently to the ground, they’re intercepted, for example. Blitz patterns are cleaner and get the quarterback as opposed to getting nicked or knocked off. Route combinations are cleaner, people come open a split-second sooner. and things of that nature.

“I don’t want to act like its rampant, it’s not, but it doesn’t have to be rampant in terms of it changing the climate in terms of how games unfold. You hear it said in a cliche-like way all the time regarding football. Often times these games come down to a small number of plays and so when we’re talking about lack of detail or discipline, it’s not rampant, but its enough that it’s changing the outcome of games. And if it’s a splattering of plays, then we need to do whatever it is that’s required to change that, and we are.”

“Both,” said Tomlin. “I know that our approach to the work is going to be such and I think individually the guys have to make an accounting of what it is that they’re doing and how they’re doing it. And turn over every stone that they can in their power to be a positive contributor to our efforts and based on our meeting yesterday, I think that’s the sentiment of the group and I’m optimistic about it from that perspective.”

Tomlin was later asked how he goes about getting better at coaching and he delivered a very lengthy response.

“Coaching is not something that’s in a permanent state,” said Tomlin. “It’s something that you earn daily. Just like playing is something that you earn daily. When we walk into stadiums your reputation and resume doesn’t win football games. What you do in that stadium does. Whether you have a helmet on your head, or whether you have a headset on your head, so when we’re talking about being excited about the preparation process and doing what’s required for us to turn the tide and win a football game, I’m talking about just that.

“As a player you lace your cleats up, you take the practice field, you practice minutia, the details associated with your position in effort to be on the details and deliver for us. As a coach, we do the same things. It’s not cleats we’re lacing up, it’s not a helmet that we’re putting on, but on a day-in and day-out basis we’re working our tails off to put these guys in position and formulate a plan that puts them in a position to be successful.”

Sundays game against the winless Browns is a big one as a loss will could ultimately result in the team having a very slim shot at making the playoffs. Even though the Steelers could be without their defensive captain, defensive end Cameron Heyward on Sunday due to a pectoral injury, the rest of the defense must find a way to limit the Browns offense. In short, the entire team needs to be on their details Sunday in Cleveland and if they’re not, Tomlin’s coaching abilities will continue to be questioned even more than they already are right now.