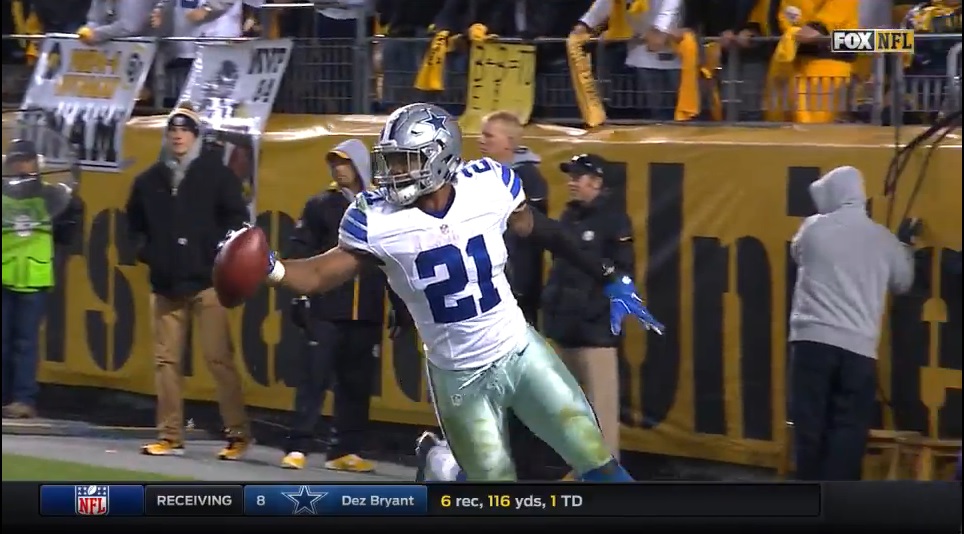 While Sunday’s last-second loss to the visiting Dallas Cowboys left Steelers Nation in shock to start the week, it’s important to take some solace in the fact that — despite a dreadful day in terms of statistics — the Steelers defense really cleaned up its act in the tackling department against a very strong offensive unit.

Well would you look at that? We have a new leader for the most missed tackles on the team following Week 10’s game against Dallas.

For all the trash talk that No. 23 does on a daily basis as a member of the black and gold, it’s pretty ironic to me that Mike Mitchell currently leads the team in missed tackles. I digress though.

Let’s move on to the game itself.

It was great to see the Steelers force a big turnover early in the game against Dak Prescott and the impressive Dallas offense as Anthony Chickillo broke free off the edge, chasing down an unsuspecting Prescott for the strip sack. However, on the play it might be lost that Ryan Shazier — in his only miss of the game — failed to get Prescott on the ground at the start of the play with a free lane to the quarterback.

At the snap, Shazier does a great job of diagnosing the read-option between Prescott and Ezekiel Elliott, knowing that Prescott is keeping the ball. What Shazier fails to do — like usual when he’s bursting into the backfield — is bring his feet and really drive through Prescott’s lower half.

Dak is a big quarterback that is strong and rarely goes down on first contact, so Shazier needed to bring all of his weight behind him, driving through Prescott’s lower half. Fortunately for Pittsburgh, Shazier’s miss on an arm tackle attempt didn’t cost them as Chickillo was able to chase down Prescott and force the fumble, which Shazier was able to recover on a great hustle play.

While things started well for Pittsburgh’s defense, they didn’t stay that way as Elliott heated up for the Cowboys, gashing the Steelers on an impressive screen play.

Things don’t go well initially up front for the Steelers as the Cowboys execute the screen pass to the right flat to perfection, getting Elliott the ball in space with mammoth blockers in front.

However, take a look at the job Robert Golden does from his safety position. He does a good job of diagnosing the play quickly from his safety position, sprinting to the sideline to try and get ahead of the blockers, but by doing that he overruns the play, allowing Elliott to easily avoid his diving attempt to haul the running back down.

If Golden doesn’t overrun this play and fail to slow down Elliott, instead trying to run through a blocker, maybe — and that’s a massive maybe — a guy like Shazier is able to track down the Dallas running back.

As I mentioned earlier, this screen play for a score really got Elliott going, allowing him to heat up throughout the game, giving the Cowboys a workhorse to ride down the stretch.

On this play, Pittsburgh knows a run is coming. The Steelers have nine guys in the box at the snap and fail to stop Elliott on a key third down run midway through the third quarter.

At the snap, Dallas’ offensive line gets a great push up front, creating a nice hole for Elliott to work with. However, Lawrence Timmons comes through cleanly, setting himself up for a one-on-one stop with the rookie running back at the line of scrimmage.

Unfortunately, the veteran can’t make the play on the rookie as Timmons comes into the hole and fails to break down to make the big stop. Timmons is off balance as he goes to try and tackle Elliott, allowing the rookie to cut back to his left, leaving Timmons to grasp at air as the Cowboys convert a big third down on the ground against a nine-man front.