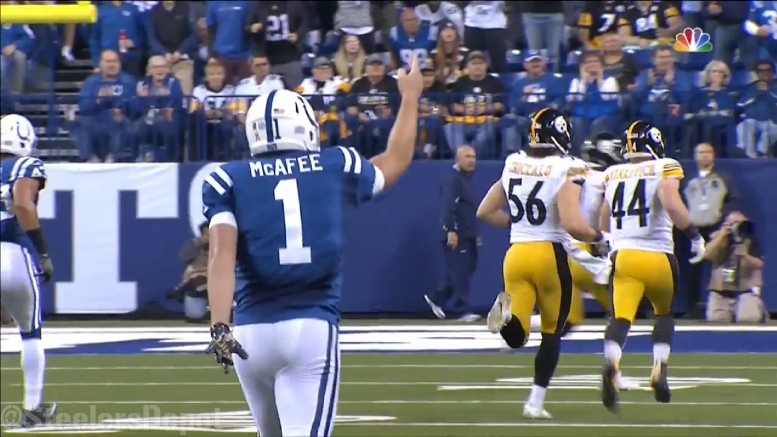 At this point—for the moment anyway—it really doesn’t matter whose fault it is. The Pittsburgh Steelers simply need to see better from their special teams units than they have been getting lately, and, really, throughout much of the season. I’m not immediately calling for the firing of the special teams coach, but there has simply been too many negative plays throughout the season.

In just their last game alone, the Steelers allowed a 43-yard kick return against the Colts that ignited the team’s lone scoring drive—the same drive that was aided by a successful fake punt executed by the home team that resulted in a passing play of 35 yards and which set up first and goal.

You can even add Jordan Berry to the mix lately, who has been averaging below 40 yards per punt. Against the Colts, he had a 36-yard punt that was fair caught at the 37-yard line. Perhaps that is because he spent Sunday’s game outkicking his coverage and allowing punt returns of 18 and 14 yards.

Of course, we could go back further into the season if we wanted to, and still find plenty of more incidents that have occurred on special teams to gripe about. There was the field goal that was blocked, or the roughing the kicker penalty. Of course, against the Ravens, there was the blocked punt that was returned for a touchdown that made a 13-0 game 21-0, and eventually ended with a score of 21-14. You can even add in the blunder of an onside kick attempt against the Cowboys, and subsequent illegal kick penalty on top of that.

But the bottom line is that there have been too many mistakes made on the special-teams units this year that have hurt the Steelers and significantly damaged their opportunities to win games, even if they were able to overcome some of the obstacles that they have imposed upon themselves.

For a team that is not firing on all cylinders on either the offensive side of the ball or the defensive, to be exposed to the comedy of errors that they have seen on special teams this year is really borderline inexcusable and something that they cannot afford.

While the Steelers have rarely been an above average team when it comes to their special teams units, it has been rare that it has actually been a liability. This year, it is legitimately hovering within the range of being fairly considered as a liability and a contributor to their 6-5 record.

We have already seen that it can play a critical role in a game, and in their season. The blocked punt returned for a touchdown covered the margin of victory over the Ravens, the team that has a game in hand in the head-to-head tiebreaker for the lead of the AFC North.

It’s true that the Steelers are relying upon a lot of rookies and young players, as well as injury replacements, to carry out key special teams assignments, but there can be no excuses. The errors need to be cleaned up from this point forward. It’s already had too big of a negative impact on this season.