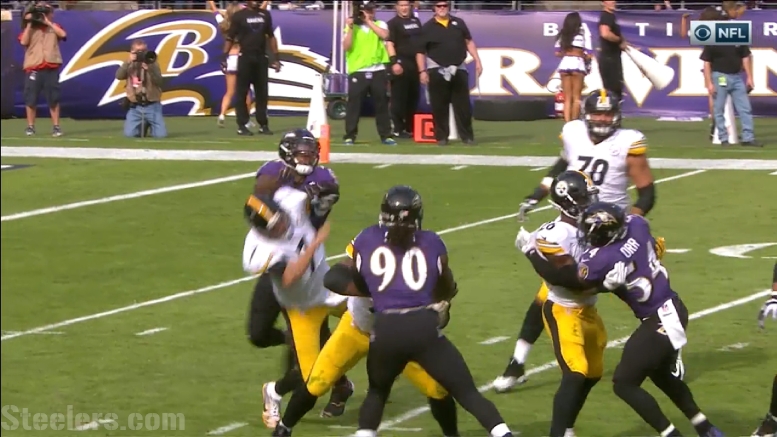 This will not exactly be met as breaking news, but a big reason for the Pittsburgh Steelers’ struggles on offense on Sunday against the Ravens was the fact that they did a terrible job of finding success on third down, at least until it was too late to mount a convincing comeback. I believe they went something like 0-10 on their first 10 third-down opportunities.

It is true that much of that was related to the fact that they also fairly consistently put themselves in poor down-and-distance circumstances, so that few of their third-down opportunities came under manageable circumstances, but for a team that was right up there with the best in the league in this regard not too long ago, they have really fallen off a cliff. And here is what the view looked like on the way down.

The first real failure I want to look at came late in the first quarter. The Steelers were facing a third and four, but they still chose to the run the ball in spite of the fact that they have already been struggling to find success on the ground. facing a six-man box with six blockers, multiple one-on-one losses led to a run for no gain.

At the top of the second quarter, with the Steelers facing a third and five, Ben Roethlisberger was simply off-target on a short pass in the direction of Sammie Coates that was closer to his feet than his hands. He was not under pressure, nor was the anybody in the throwing lane, nor was he trying to pull the ball back down.

Facing a third and seven at the two-minute warning, Roethlisberger tried to hit his running back on a screen pass, but the Ravens showed a six-man blitz with five blockers. Baltimore dropped one blocker but it was too late to adjust for the left tackle to chip the edge rusher. Roethlisberger was under pressure and got off a poor throw.

Later, on another third and five, Roethlisberger, as he often does, looked deep down the field. And the team has had success doing this, so the choice itself cannot be blamed. But Roethlisberger had Sammie Coates in one-on-one coverage open down the left sideline, only to overthrow the ball. He looked like he would have also beaten the safety and scored on the play.

In the fourth quarter, after the Steelers’ first touchdown, Pittsburgh got down to Baltimore’s 13 to set up a third and six. The Ravens sent just a three-man rush, but the left edge rusher beat the right tackle one on one and Roethlisberger was unable to scramble out of his grasp.

These are just five of 12 ways the Steelers managed to fail to convert on third downs during the day. Earlier this season, they would have managed to convert many of them. When they don’t, it should probably go without saying, but the offense struggles significantly.