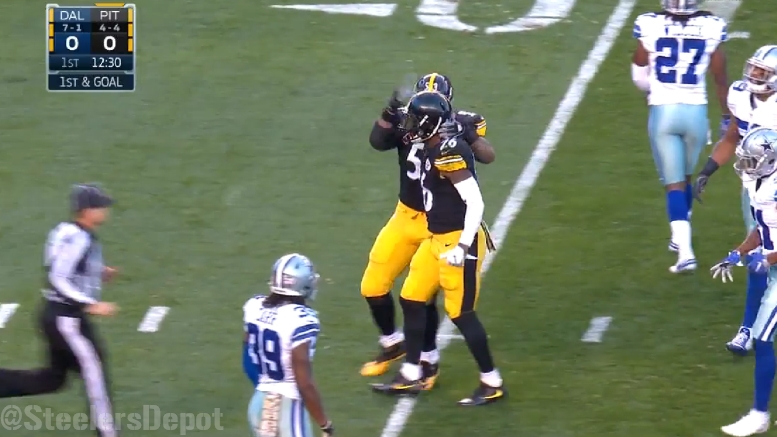 We all know by now that Le’Veon Bell is pretty good. And we also know that a good chunk of the yardage that he produces for the Pittsburgh Steelers is as much a product of his own doing as it is that of his teammates, whether it is his blockers not completing their assignments or him simply making passes that make the throws from his quarterback look better because he has a receiver’s hands from the running back position.

I think that one of the most useful measurements of the quality of a running back is to look at how many yards he picks up that go beyond what the blocked was blocked up to produce—not necessarily how it was drawn up, but rather how it was executed. That seems to be a good tool to judge how much of his production is from his own contributions. So we’re going to take a look at some of the better examples from Sunday of Bell raising the level of difficulty to make plays.

The examples actually came early and often, so I refined my search. The first play I want to look at is the Steelers’ third play, and Bell’s second touch of the game. On first down from the Cowboys’ 26, Ben Roethlisberger looks left first as though he is going to throw an elongated screen pass before flipping back to his right and hitting Bell in the flat, fading to the sideline before cutting inside. Six yards in, he made a hard lateral cut that got two defenders off their feet, followed by a hard vertical cut that helped him finish off the 12-yard play.

It was also Bell who finished off that drive with another reception and his first touchdown of the season. On this play, he lined up out wide with the safety in coverage two yards out. At the goal line, he stutter steps, which accomplishes the goal of the safety giving ground, allowing him to take the shallow inside zone of the end zone. He proceeded to make an exceptional stabbing reception to finish off the play that shows hands well above that of a typical running back.

Later in the first quarter, as the Steelers were about to score again, he following up a 16-yard run to the nine-yard line with an eight-yard gain on which he showed some nifty moves to pick up extra yardage. The tight end was pushed into his face in the backfield, but he stayed patient, found a crease opening, made a cut to get upfield, then spun out of one more tackle before diving ahead to get to the one-yard line.

Five minutes into the second quarter, it was his patience again that eventually opened up the left side. With two defenders chasing him close behind, he made a sharp cut to turn upfield behind the left guard, and then another about eight yards out to avoid initial contact.

Bell started their last possession of the half with a 13-yard reception. Once again, he worked out to the flat before angling back toward the middle of the field. The safety came up hard on him, but the running back spun out of contact at the line of scrimmage and turned it into a first down while getting out of bounds.

I think that these plays illustrate just how much of his game doesn’t actually end up on the stat sheet. Now if only the offensive line could have a bit more consistent success in the blocking department, we would be back in business.