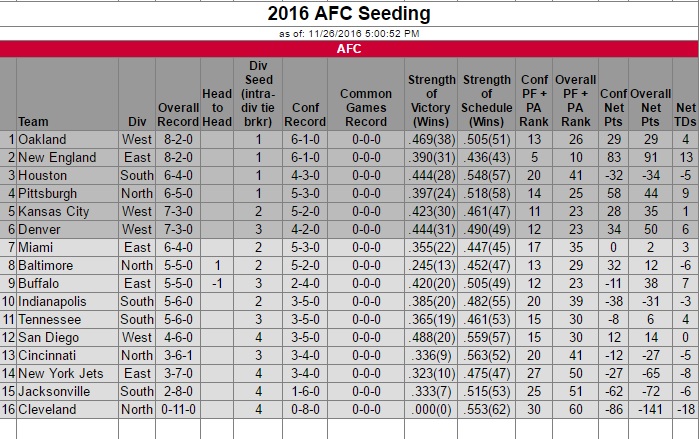 Entering Sunday, the Pittsburgh Steelers are currently the No. 4 seed in the AFC thanks to their Thursday night win over the Indianapolis Colts. With that said, there’s still quite a few key games to be played this weekend. Below are those key games that Steelers fans should keep a close eye on Sunday.

Cincinnati Bengals at Baltimore Ravens – It goes without saying that this AFC North matchup will be the key one on Sunday when it comes to the Steelers. The Ravens will be hosting a Bengals team that will be without the services of injured wide receiver A.J. Green and running back Giovani Bernard. The Ravens, on the other hand, have been very inconsistent on offense this season and especially when it comes to scoring points. A loss by the Ravens on Sunday would result in the Steelers taking over first place in the AFC North. The Bengals really need to run the table as well if they want to have any shot at making the playoffs.

San Diego Chargers at Houston Texans – The Texans will enter their Sunday home game against the Chargers as the No. 3 seed in the AFC. Should they ultimately lose to the Chargers and the Ravens wind up losing to the Bengals, there’s a chance the Steelers could exit Week 12 as the No. 3 seed, depending on what happens in a few other Sunday games.

Kansas City Chiefs at Denver Broncos – Does it really matter which team wins this game? Well, possibly. If you are a fan of the Steelers, you’ll probably want to root for the Chiefs in this game being as Pittsburgh owns the head-to-head tie breakers over them. Regardless of which team ultimately wins, both will still be in good shape when it comes to playoff possibilities. Entering this game, the Chiefs are the No.5 seed in the AFC while the Broncos are currently the No. 6 seed.

San Francisco 49ers at Miami Dolphins – While the Dolphins aren’t likely to win their division again this year, they are still in the hunt for a Wild Card spot. Thanks to their win over the Steelers several weeks ago, they’ll own the head-to-head tiebreakers over Pittsburgh should it ultimately come down to that. The 49ers have been awful this season, but perhaps they can pull off an upset on Sunday.

Jacksonville Jaguars at Buffalo Bills – Like the Dolphins, the Bills are only playing for a Wild Card spot at this point. A loss Sunday to the Jaguars would put the Bills a full-game behind the Steelers. With that said, the Bills will host the Steelers in Week 14 and that figures to be a huge game for both teams. Hopefully the Jaguars can pull off the upset in this win.

Carolina Panthers at Oakland Raiders – The Raiders enter Sunday as the No. 1 seed in the AFC. For the Steelers to catch them, they’ll need Oakland to drop several of their final 6 regular season games. Keep in mind that the Raiders still have games against the Bills, Chiefs, Chargers, Colts and Broncos, so it’s unlikely they’ll run the table. A Sunday loss to the Panthers could wind up being huge if the Steelers can ultimately win out.