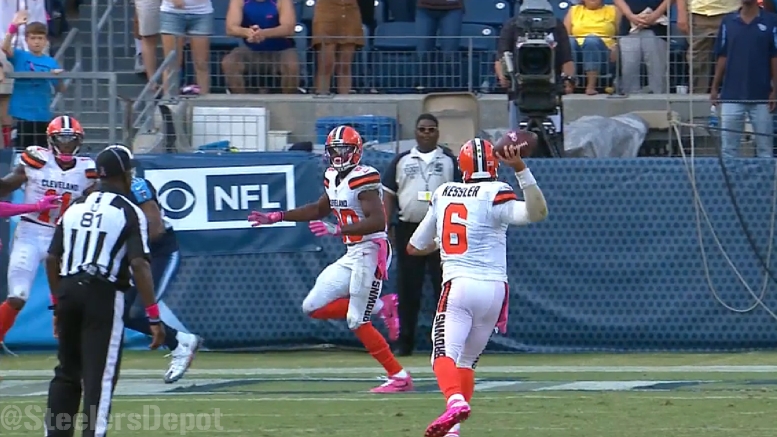 Over the course of the week leading up to yesterday’s game, the Cleveland Browns elected to re-insert rookie quarterback Cody Kessler into the starting lineup, who missed last week’s game due to the fact that he remained in the concussion protocol after suffering one in the first half of the previous game.

In the interim, the Browns did get back quarterback Josh McCown, who returned to start a week ago. McCown started the second game of the season, but suffered a shoulder and collarbone injury that forced him to sit out the proceeding five weeks, during which Kessler started and began to earn the respect and confidence of his coaches and teammates.

That is why, even though McCown had a reasonable showing the week before, Head Coach Hue Jackson elected to turn back to Kessler when he was ready to play. And for this week, he was up against the Dallas Cowboys and rookie quarterback Dak Prescott, who was actually drafted a round after the Browns selected Kessler.

Since the start of the season, Kessler how now started six games and has lost all six, while Prescott has won seven of eight games. Of course, Prescott’s Cowboys are exponentially better and more talented than the cast of characters that Cleveland calls the Browns this year—and for many previous years.

While Kessler was not particularly bad or good during the game, he and the Browns were generally ineffective. Kessler completed 19 of his 27 pass attempts for 203 yards, averaging 7.5 yards per pass attempt, with one touchdown and no interceptions.

But it didn’t help that he was also sacked four times. In fact, he has been sacked 14 times since entering the starting lineup, and that includes two games in which he threw 11 or fewer passes because he was knocked out of those games.

Kessler was not the only rookie making his return for the Browns in this game, however, as first-round wide receiver Corey Coleman, who has been out since the second game of the season with a broken hand, was back for Cleveland and playing in front of his home town team.

The rookie tandem, however, only connected on three passes for 41 yards. It should be noted that Coleman has had a different starting quarterback for each of the three games in which he has played so far, a level of instability that is hard to find consistency in, to say the least.

It’s unclear exactly what the future of the position seems to be for the Browns’ quarterback, but it seems that for the short term, Kessler will remain under center for the team, despite his 0-6 record.

The fact that Cleveland is up for a short week, set to face the Browns on Thursday night, likely plays a role in that, but the team also genuinely seems to like Kessler, and may choose to stick with him after all, even though McCown is the more experienced player who has statistically not done poorly.