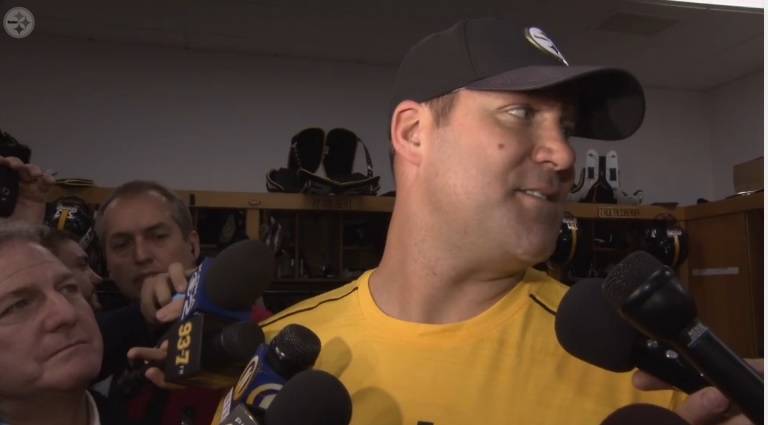 To play or not to play, that is the question.

And we don’t have any idea. We won’t have any clearer of a picture for Ben Roethlisberger’s Sunday status until Friday at the earliest and even then, a questionable tag could be slapped on him, making things uncertain into the weekend.

Those factors will generally come down to two factors, Roethlisberger told reporters today: pain tolerance and swelling in his surgically repaired knee.

Right now, the swelling is down, but the pain is still there.

“Oh yeah,” Roethlisberger responded when asked if there was still any pain in his left knee. “When you have surgery two weeks ago, there’s going to be a little bit. But listen, anybody in this locker room who’s not feeling pain hasn’t been on the football field.”

He underwent surgery to trim a torn left meniscus on October 17th, forcing him to miss the following week against the New England Patriots. That makes it officially 16 days since his surgery.

According to Ben, Dr. James Bradley told him keeping the swelling down is the most important evaluation to determining if he can play. In that aspect, Roethlisberger said things look good.

But ultimately, the doctor’s evaluation will be coupled with Roethlisberger’s own evaluation. What the doctors say still carries more weight – if they say no, he’s out – but if they give him medical clearance, it’ll be up to #7 to determine if he feels right and comfortable being out there.

In a way, it’s fortunate he’s suffered so many knee injuries before, giving him the ability to compare this one to past injuries and better gauge how his body is truly responding.

“[Dr. Bradley] said I’ve gone through this before. So my body will tell me best as to how I feel.”

If Roethlisberger is not available, Landry Jones will again come out of the bullpen. He told reporters what he’s told them basically every week; it’s not any less true, just obvious. He’s preparing like he’s going to be the starter every week. Jones did admit he doesn’t expectation any more clarity on who will start until later in the week.