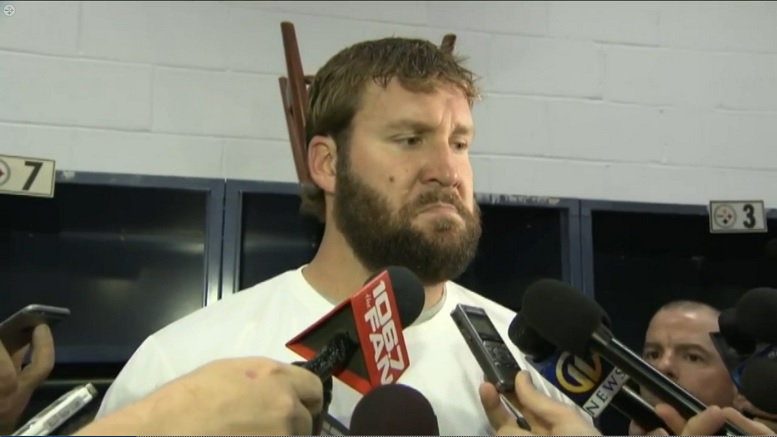 The Pittsburgh Steelers traveled to the nest of the Baltimore Ravens on Sunday afternoon, and it was a difficult day on both sides of the ball to say the least. The Steelers offense struggled immensely coming off of their bye, as they looked uncomfortable and off-rhythm for most of the game. The defense did what they could, but with no offensive help, the Steelers fell to the Ravens to a score of 21-14.

Both teams began the game by trading punts, as both offenses were trying to find their stride. It would be the Ravens who would string together a few plays that would eventually see their offense reach the red zone. Fortunately, the bend-but-don’t-break defense would rear its head, as it would be rookie cornerback Artie Burns who would register his first NFL interception. He read a cross-bodied throw over the middle by Joe Flacco; a rookie-type mistake of his own. The Ravens’ 5 play, 47 yard drive would yield no points.

After an equal amount of Sam Koch punts, the Ravens’ offense finally drew first blood- and believe it or not, it would be the speedy Mike Wallace to do so. As Steelers fans have seen before, a 5 yard slant on their own 5 would put the ball into the grasp of Wallace, and the rest was history. Artie Burns, who was having a decent game up to this point, would whiff on the tackle, and Mike Mitchell would lose a foot race to the end zone, being left in Wallace’s dust. The Ravens would jump to a 7-0 lead, which in this game, left more like a 4 score lead.

The Ravens would add another three, as Justin Tucker would cap off an 8 play, 39 yard drive right before halftime. The lead going into half extended to 10-0.

This pattern would continue throughout the first half, as the team was left to ponder some ugly numbers going into halftime- 2 first downs, 0/7 on 3rd down conversions, and 10 penalties for a total of 75 yards (the team had 66 total yards of offense).

Not to mention that Antonio Brown was held without a reception until the 3 minute mark in the 2nd quarter- only the second time that’s happened since 2014. The Ravens, however, had 11 first downs and 232 total yards of offense.

The second half started where it left off, as a Ben Roethlisberger pass would be tipped at the line of scrimmage by Brandon Williams and into the arms of Timmy Jernigan. The turnover would result in a 42-yard Justin Tucker field goal, extending the lead to 13-0.

As the Steelers would continue their 3-and-out trend, a Berry punt was blocked by Javorious Allen and picked up by Chris Moore for the 14-yard touchdown return. It seemed as though the team began to shut down, as the countless mistakes were beginning to take their mental toll- rookie Sean Davis looked as though he completely missed his assignment to chip and block Allen before galloping downfield on the attempted punt. The lead grew once more to 21-0 after a successful Steve Smith Sr. reception for the 2 point conversion.

The offense would finally find the end zone in the fourth quarter, as Antonio Brown would cap off a 9 play, 75-yard drive with a 23 yard reception from Roethlisberger. Ben would display some vintage Ben, running around the pocket (to the best of his ability because of knee) to extend the play long enough to find Brown at the edge of the end zone. The lead was cut to 21-7.

A last-gasped effort by Ben and co. would add another 7 to the scoreboard, making the game 21-14. Ben would call his own number, displaying his strength and determination with a bummed knee; his 4-yard touchdown run capped a 7 play, 64-yard drive, but unfortunately it would be as close as they would come, as the comeback fell short, as an embarrassing, gimmicky on-side kick attempt would fail.

The Steelers would lose this game, 21-14 to the Baltimore Ravens. The Steelers look to snap their current 3 game losing streak against the blazing-hot Dallas Cowboys next week in Heinz Field. It’ll help to have Ben on the practice field for a full week, as the offense needs to regain their mojo if they hope to find their stride and make a second-half push for the post season.