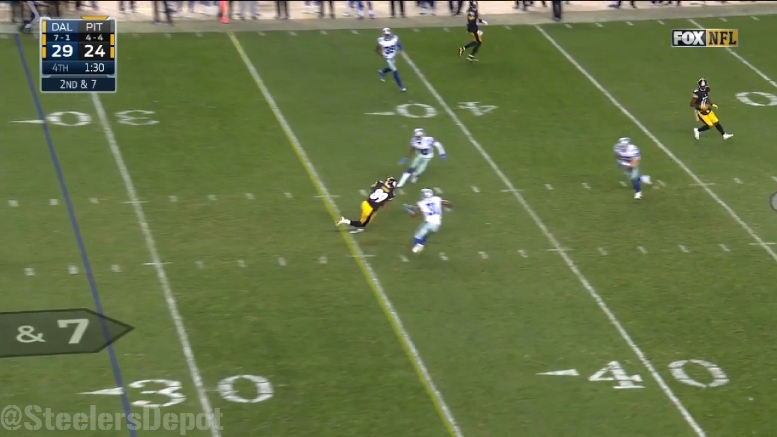 Yesterday was the long-anticipated and long-awaited Pittsburgh Steelers debut of free agent tight end Ladarius Green, who spent the first half of his first season with the team on the Physically Unable to Perform List while he was struggling to work his way back from surgery on his ankle in the offseason stemming from an injury that ended his 2015 season.

He didn’t light things up. But he didn’t disappoint either. In fact, he really didn’t play all that much, as according to Pro Football Focus, he only played a dozen snaps, with the majority of the time in yesterday’s game going to Jesse James, who actually saw less playing time than Xavier Grimble the week earlier.

And to his credit, as an aside, James actually played like a guy who was looking to keep his job—well, at least as a pass catcher, as he still struggled as a blocker. But on a year in which he has been barely averaging seven yards per reception, he hauled in four passes yesterday for 59 yards, or double the production per reception that he had been getting.

But back to Green. In spite of his minimal playing time, Ben Roethlisberger still targeted him four times, or five times if you include the first two-point conversion attempt, which actually does not count. So if he played 12 snaps and was targeted four times, then that means that Roethlisberger looked his way on exactly a third of his snaps in the game.

He came up with three receptions for 30 yards in the game, a respectable level of production given the circumstances, with it being his first game back in nearly a year, still working his way back into football conditioning, and, of course, having only played a fraction of the game.

His production was surprisingly balanced, as he caught passes of 9, 10, and 11 yards, although not in that order. And I would be lying if I tried to make the claim that any of them really served as an endorsement of his vast receiving skills that made him such an important signing.

But it was actually his two targets that he did not come down with that are more illuminating about the way in which the Steelers are hoping to use Green, because the first one—the two-point conversion attempt—was a corner fade on which he would be able to use his 6’7” frame, and the other was a deep target down the seam that takes advantage of his speed.

Over the course of the next several weeks, Green will have the opportunity to get more and more into game-ready physical conditioning and build a stronger and stronger rapport with Roethlisberger and the offense, and over the course of that process, he will be taking on a bigger and bigger role.

It is a transition that may occur gradually with James and Grimble still in the mix. But it will come, and it will be a late-season boost for the offense. Yesterday’s debut was just a taste.