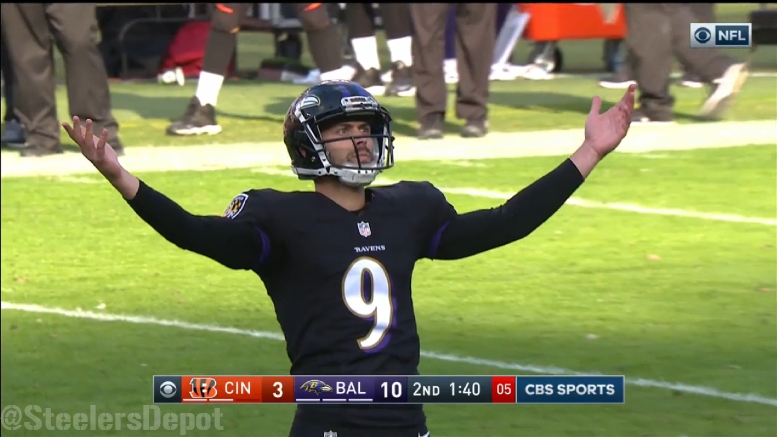 Don’t get me wrong. Baltimore Ravens kicker Justin Tucker deserves all the accolades that he gets. I don’t think it’s much of an argument to say that he is the best and most talented kicker in the league, especially given what he has done lately. Just on Sunday alone, he kicked four field goals and provided the margin of victory just from the ones—three of them, mind you—that came from beyond 50 yards, with a long of 57 yards.

Only once in Steelers history has anybody ever kicked one that long, by the way. In 1988.

But if you ask me, Ravens Head Coach John Harbaugh’s most recent proposal certainly strikes me as somebody trying to justify what the team elected to pay their kicker this offseason, inking him to a four-year deal worth $16.8 million. That included $10.8 million in guaranteed money.

“He had a kickoff go through the uprights”, Harbaugh said during his post-game press conference. “I’m on record as advocating that that should be a point”. After the assembled media “chuckled in response to the suggestion”, according to an article on the team’s website, he responded, “I’m serious now”, before watering it down with a “kind of”.

He continued: “how exciting would that make it? If we’re going to make these touchbacks so valuable, let’s do it, let’s go for it”. Unsurprisingly, Tucker agreed with his head coach’s suggestion that he should be able to score more points, on arguably the one play in the game in which the team that begins the play with possession is not supposed to be able to try to score.

“I think eventually we are going to keep making the game harder for kickers” he said. “Then you have to reward us in some way”. Of course, the game has been made more difficult for kickers because they have become too good at it.

And that applies only to the extra point attempt, a rule change two years ago. The league also made their job significantly easier by moving the line of scrimmage on kickoffs up five yards. If you want to turn the kickoff into a possible scoring play for the team with initial possession, you’re going to have to move the line of scrimmage back to the 20-yard line or something.

I know there’s some bias as an idea coming from the head coach of a division rival of the team that I support, but Harbaugh’s proposal that a kickoff that goes through the uprights being worthy of a point seems a little ridiculous to me.