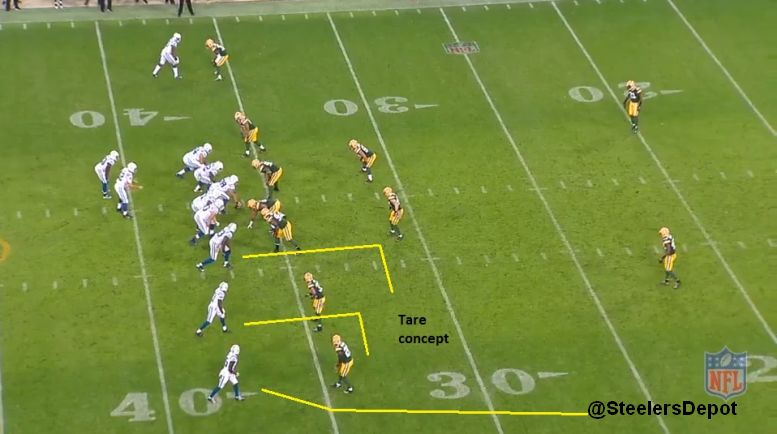 It’s been squarely average this season. Frank Gore is still their workhorse with 163 carries this year. Robert Turbin’s 20 is in second place so Gore, even at his age, is one of the few backs with that kind of split.

But I wouldn’t classify him as a three-down back. Turbin, #33, sees a lot of third down duty.

The run game has struggled to bust off big runs or in general, just have a strong game. As pointed out in yesterday’s The Terrible Podcast, they’ve only had two 100+ yard rushers in the Andrew Luck era. Frank Gore averages just 3.9 YPC, which matches the team out, ranking them 22nd in the NFL.

They have just 21 rushes of 10+ yards, Dave Bryan astutely pointed out 10 of those have come via Luck, and it still ranked tied for 27th in the NFL. They are ranked the same in runs of 20+ yards.

Here’s how I project their OL to look.

Haeg has been the weakest link this year though it’s hard to say any one player has done particularly well.

The run scheme is varied, a good mix of everything. Some inside zone, lot of power, base-blocking concepts. Also a great deal of split zone, and they pair that with a fake end around to hold the backside EMOL. Like here.

Jack Doyle is most commonly their lead blocker. He’s a tight end, H-Back, sorta uniquely used. Indianapolis uses a lot of 12 personnel with Doyle and Dwayne Allen. Doyle has played more all season but Allen played 82% of the time in last week’s win against the Tennessee Titans.

Also last week was a lot of Wildcat with Gore as the “quarterback.” There were some conventional runs out of it and also one wrinkle by Chuck Pagano – a direct snap to Gore, reverse to Luck, who then attempted to look vertically. It was well covered but Gore leaked out and it produced a big, big play.

On a short week, it is tough to prepare for that stuff. Not enough reps to deal with that and their conventional, base offense. Could be a problem.

They used one fullback dive on the goal line too, giving the ball to Turbin for a touchdown.

Andrew Luck has obviously been ruled out, leaving Scott Tolzien starting in his place. His career numbers don’t look good, one touchdown to five interceptions, but that was in 2013 with the Green Bay Packers. So history is hard to lean on too much. Stephen Morris will be the backup.

Their top weapon is T.Y. Hilton. He’s the far and away leader with 99 targets, no one else has more than 50. Predictably, he also leads them with 57 receptions and a very healthy 15.6 yards per catch.

He’s one of many with a high YPC; Phillip Dorsett is a crazy speedster averaging 17.3 yards per catch while Chester Rogers is at 14.2. Donte Moncrief is back in the lineup after missing weeks with injury.

Back to Hilton. He’s their #1 threat and lines up all over the field. Inside and out.

It’s Doyle, their TE/H-Back who is somehow second on the team with 37 catches.

The passing game has been a mixed bag. 41 receptions of 20+ yards, tied for third in the league, but only six of those have gone for 40+, which is closer to middle of the pack. Their 7.5 YPA is 12th, their 62.9% 17th, but they have been sacked a ton. 35 times, second in the league, and only behind the Cleveland Browns.

Their red zone offense has been pretty good, 41.2% conversion rate, and their red zone offense is one stat to really focus on. Second best in the NFL at 71.9% and an absurd 85% at home, which is heads and shoulders above anyone else. Luck’s absence is going to put a damper on that, of course, but it’s one of the #1 stats for me.

Conceptually, they love intermediate crossing routes. One of their favorites is a “Pin” route, a post and in-cut combination route. Becomes a divide route to put the safety in a bind and makes him choose a route. Here’s an example.

Or tare routes, which are a pair of out routes and one vertical. 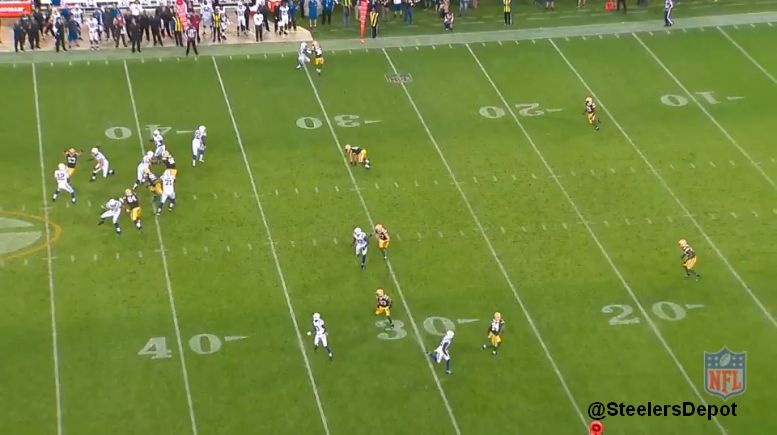 They do a very nice job of route combinations to open people up. Routes are very dependent on another, they don’t just try to win with pure talent as Todd Haley sometimes asks his receivers to do.

Jordan Todman, you remember him, has been a big threat as a kick returner this year. He had two monster returns against the Green Bay Packers, including a 99 yard opening kickoff return for a score. He’s averaging 35 yards on nine chances.

Safety Matthias Farley, rookie safety T.J. Green, and CB Rashaan Melvin have all been seen as jammers on punts.

Pat McAfee is their holder/punter. He has one career fake, a successful 18 yard run last season. It came with the Colts down 24-14 on their own 20 in the third quarter.

On field goals, they have two tight ends at the wings. Doyle, their second leading receiver, and TE Erik Swoope. Always perk up a bit when there are two skill guys on the wings.

First off, Happy Thanksgiving to all of our readers out there! We wouldn’t be able to do what we do here at Steelers Depot without the love and support from all of you. For that, I sincerely thank you.

Now that the mushy stuff is out of the way, it’s time to take a look at the Indianapolis Colts offense, sans Andrew Luck, who has been ruled out of tonight’s game with a concussion.

Scott Tolzien, the former Green Bay Packers backup, will start in place of the injured Luck, so that pretty much threw my preparation for this game out the window — at least in terms of the quarterback position.

Despite those middling numbers on offense, the Colts have found a way to play .500 football through ten weeks of the season. Granted, a lot of that comes from playing in the AFC South, but that’s beside the point.

Although the stars on offense are there with Luck, Frank Gore, TY Hilton, Donte Moncrief and emerging tight end Jack Doyle, the downfall of the Indy offense is — and has been during the entire Luck era — a dreadful offensive line.

Across the board, Indianapolis will likely deploy this offensive line tonight against the Steelers:

Starting two rookies up front is hard for a team looking to win now with a star quarterback in Luck, so it should come as no surprise that the Colts have allowed the second-most sacks in the league this season (35), trailing Cleveland by just three.

While that number is concerning, the rookies largely haven’t been the problem. It’s mostly been Castonzo struggling with speed rushers on the edge, as well as Good getting steamrolled on the interior.

As the pass protection has broken down far too often, so too has the rushing attack as the Colts have recorded just one 100-yard rushing performance this season by an individual, which was Gore in Week 6 against Houston in a 26-23 loss.

Much like the rookies aren’t the problem up front for Indy, Gore isn’t the issue when it comes to running the ball as the Colts allow far too many defenders to get significant penetration into the backfield, shutting down a number of running plays before they even have a chance to get started.

The veteran running back is getting up there in age (33) and miles (3,269 career touches) but he’s showing no signs of slowing down, breaking the trend of running backs declining after their age 30 season.

With Gore providing the Colts with a steady presence in the running game, it has allowed Indianapolis to keep a balanced offensive attack, keeping defenses honest against the run which has provided Luck with room to operate down the field with guys like Hilton, Moncrief, Doyle and second-year speedster Phillip Dorsett.

The Colts don’t run a ton of different route concepts; it’s a very basic passing attack, but one that has really fired on all cylinders the last few weeks. Using a large number of drags, crossing routes, slants and out routes, the Colts can rock you to sleep with short, efficient passes before going up top off of play-action for the big play.

By having a balanced offense, the Colts can utilize the play-action here, freezing pass rushers to give Luck the time he needs to find the streaking Hilton down the sideline for the big catch against the Titans.

Then, once the Colts get into the red zone they’re one of the surest bets to come away with points in all of football, scoring on 72 percent of trips inside the red zone, trailing only the Titans (75 percent).

Moncrief has been a big reason why the Colts have been so dominant in the red zone lately, as the third-year receiver has scored a red zone touchdown in three straight games since returning from a neck injury.

This score against Tennessee was a great play design by the Colts, allowing Moncrief to run underneath the defense with a corner trailing, giving Luck ample room to fire home the score.

We shall see if Tolzien can put some drives together to keep tonight’s game competitive. If he can, expect him to look for Moncrief in the red zone early and often.

Outside of the offensive attack, Indianapolis has a really strong special teams unit, starting with arguably the best kicker-punter duo in Adam Vinateri and the ever-entertaining Pat MacAfee.

The future Hall of Famer Vinateri has missed just one(!) field goal attempt on the season, and it came last week against Tennessee on a 42-yard try that pushed just right. Other than that he’s money, including a perfect 5-for-5 from 50+ at the ripe age of 43.

MacAfee makes headlines for his massive hits on kickoffs and punt returns, along with his entertaining celebrations following good punts, but he’s quietly been dominant punting the ball this season, averaging 50.3 yards per punt on 40 tries.

When the Colts are on the other side of the coin looking to return kicks and punts, Indy turns to former Steeler Jordan Todman and rookie Chester Rogers out of Grambling State.

Todman is the primary kick returner for the Colts, already having returned a kickoff 99 yards for a score three weeks ago against the Packers to start the game.  On nine returns this season Todman is averaging an absurd 35 yards per return.

As for Rogers, the rookie isn’t flashy returning punts, averaging just 5.6 yards per return (long of 11) on the season. What he is though is steady back deep, catching the punts that he needs to with confidence, which is much-needed for a young guy in that situation.