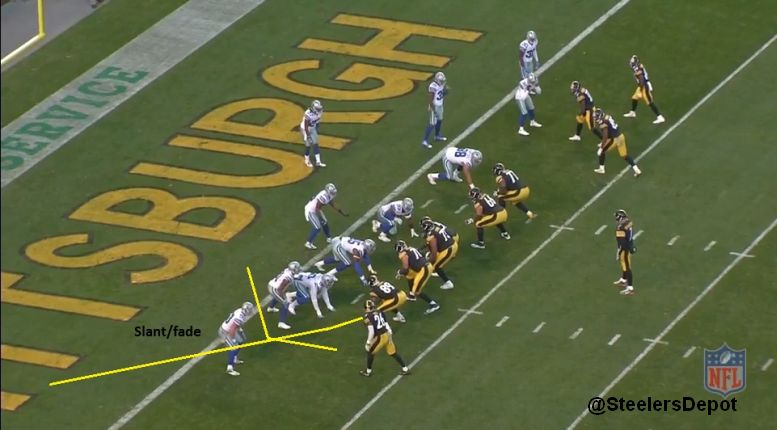 The Pittsburgh Steelers were prepared for it, I’m sure, but it’s a safe bet they didn’t expect to try four two-point attempts in Sunday’s loss to the Dallas Cowboys. And unfortunately, they put up the big ‘ol goose egg, even more disappointing considering the success they had in 2015.

We’re going to take a brief look at the first two failed conversions. They were the real decisions; the third and fourth ones were no-brainers given the circumstances (one point leads). To the first two, were they good playcalls? Did they have a reasonable chance to work? So ultimately, were they good decisions not judged based on result but by the plan. That’s what I want to look at today.

The first one was a failed fade to Ladarius Green. I typically don’t like throwing up the go-ball, especially to someone seeing their first target all season long. Their low-percentage plays with no reads and no advantages outside of just matchup.

But the Steelers do add another element to this which I can certainly appreciate. Green isn’t split out detached and by himself. He’s serving as the in-line tight end. Le’Veon Bell is motioned out wide and the two try to run a pick play. Bell on a slant, Green on the fade.

With the Cowboys’ defenders playing at the same level, it looks good on paper. But Dallas plays it well, especially the great Sean Lee, who works over the pick and doesn’t get caught up in the defender on Green. 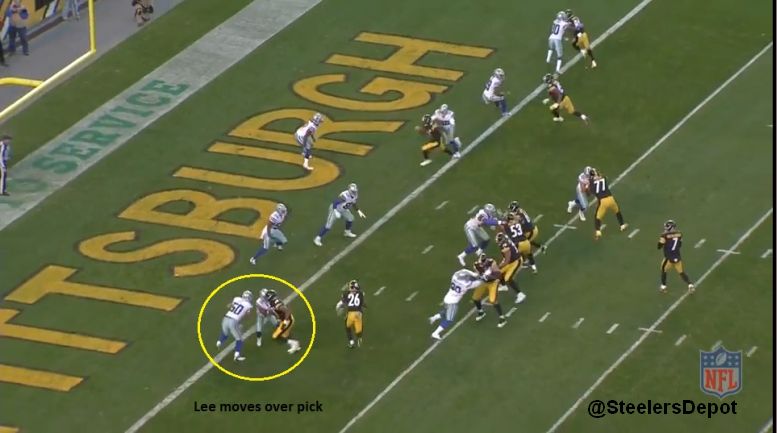 Green still has a chance to make a play but can’t come down with it.

Onto the second one. This is a staple two-point/goal line play for Todd Haley and the Steelers. Have run it or variations of it By design, it’s a one-read throw to Antonio Brown. Before the snap, he motions across the formations, fakes left and right and then is sent off to the right side right before the snap and into the flat. The goal is to out-leverage the defender matched up on him, especially if it’s man coverage the CB is following, and make the grab before Brown hits the sideline.

They’ve run it a billion times, both in games and from what I saw at training camp. Here it is from 2014 out of the same personnel they tried Sunday, 13 personnel (1 RB, 3 TE)

Here’s an example of it a year ago, not on a two-point play but one that went for a touchdown. The personnel is different, 11 personnel instead of 13, but that’s one of the best things about Haley. He can run the same designs out of any formation or personnel grouping.

But the concept is the same. A half roll to the right with Brown in the flat, out-leveraging the flat defender and scoring before he would’ve gone out of bounds.

Here is the failed play. I don’t show the throw, incomplete in the end zone to Jesse James, because it doesn’t really matter. That was far from the intent of the scheme.

There are a couple reasons why Sunday’s edition fails.

1. The Cowboys traded AB’s assignment. Kudos to Byron Jones on this one. He probably saw it coming. Normally, this play works when the defender follows across the formation and is too late to react to where AB is going. Not here. Jones waved off the right cornerback and took the receiver himself, preventing from getting out-leveraged and chasing Brown the whole way with no chance to make a play on the football.

2. The snap was late. Compare where Brown was at on this snap to the other two plays. It looks like by design, the play should start once Brown is on the right hash. That’s what happened in the two that worked.

But here, Brown is far from the hash and a good yard outside of the tight end to that side. That limits the amount of space he has to work with, they’re already running the play closer to the boundary. So here, by the time Roethlisberger drops back and looks to him, Brown is already out of room. 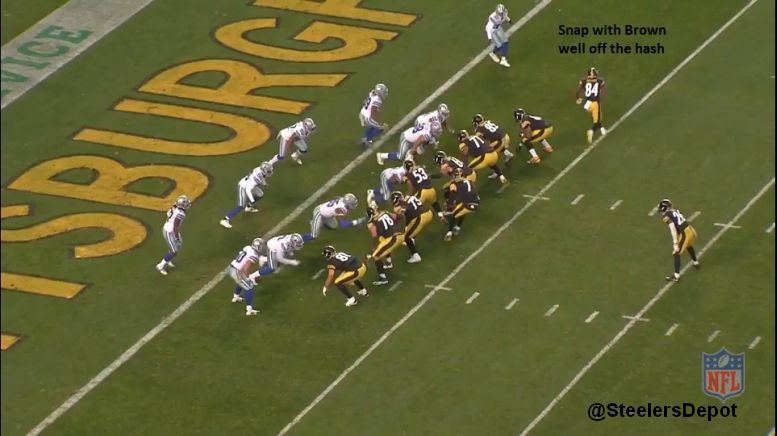 I think the call is sound. It’s worked before though yes, I totally agree at this point, it’s pretty predictable. I called it out at home, which is super rare and probably a bad sign for its ability to fool teams in the future. But if your tape study is sound, and you’re expecting them to play it a certain way, I totally get it.

Bottom line: neither call was terrible. The Cowboys made a couple of genuinely great plays to defend it.