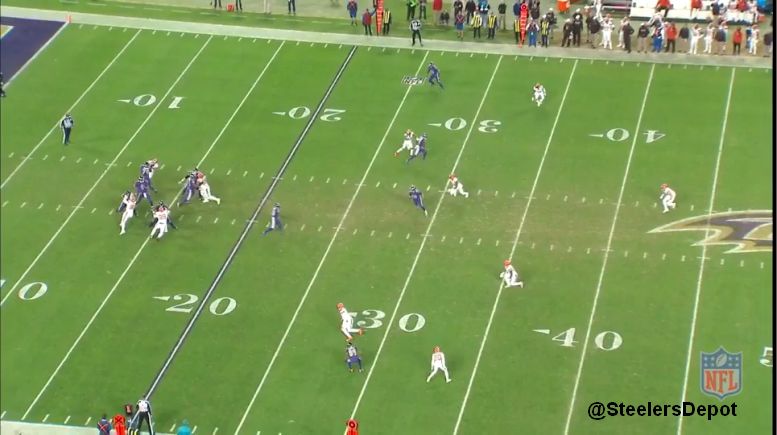 As much as the Browns’ offense has struggled, their defense has been worse. They come out looking bad in almost every metric.

As a run defense, teams are averaging 4.5 yards per carry against them (27th worst) and rushed for 12 touchdowns (28th). Even worse, they’ve allowed tied for the second most runs of 10+ yards, 36. Ditto for 20+ with eight. Granted, maybe some of that is because they are usually playing from behind so often. They generally stick around in the first half before wilting after the break.

Their front seven is led by linebacker Christian Kirksey, #58, their anchor and by far, snap leader. He has played 99.7% of the time. No one else on their defense is at even 86%. Kirksey is one of the league’s leaders in tackles with 94 total, already 60 solo, the latter being more than everyone but Lawrence Timmons on the Steelers.

Still, the Browns are a mess, with new faces being ushered in and out every week. An incredible 23 players on this defense have played at least 85 snaps. For reference, in Pittsburgh, who have had their fair share of injury problems, there have only been 18 to hit that mark.

Up front is Danny Shelton, #55, at the nose. He struggled mightily a year ago but is playing well this season and coming off a strong performance against Jeremy Zuttah and the Baltimore Ravens.

Elsewhere, the Browns seem to play their front seven to the strong and weak sides of the formation. Not just a standard left or right like you see in places like Pittsburgh. Rookie Emmanuel Ogbah is their strong side end and played over 84% of the time last Thursday night. I don’t know why Ogbah, largely viewed as an outside linebacker out of college, is playing so much base end, but here we are.

Opposite of him is a mix of Jamie Meder, a no-neck former nose tackle out of Ashland, who has carved out a niche role in the league, and Stephen Paea, a similarly stumpy player with a lot of strength.

Rookie Carl Nassib will check in a lot of passing downs and has been disruptive. The Browns have 16 sacks on the season with eight of those coming from linebackers or hybrid players. He has 1.5 of those while Ogbah leads them with three.

At linebacker is again Kirksey, their floor general, as their Mack linebacker. Demario Davis is their Buck (strong side).

Standing up is a lot of Cam Johnson, on the strong side, and Jamie Collins, who after being traded from New England, is playing of a more outside linebacker/on-ball linebacker role than he did with Bill Belichick. Collins is wearing #51.

Their pass defense has been a struggle too. No defense has given up more passes of 20+ yards, an astounding 40, while they have allowed nine of 40+, ranked fourth in the NFL.

Cleveland has picked off eight passes this year, all by cornerbacks. Joe Haden leads them with three, though his status for Sunday isn’t looking great. Dealing with an injury. He’s usually shadowing the top cornerback, making left or right differentiation meaningless. If he can’t go, it will likely be Tramon Williams and rookie Briean Boddy-Calhoun at cornerback.

Safety has rotated just as often. So many faces there. Last week, Ibraheim Campbell and Ed Reynolds started. But Tracey Howard, Derrick Kindred have also played roles at the position.

They’re a varied team coverage-wise. Quarters, Cover 2, Cover 1 (man-free and Robber) and some Cover 3. Cover 2 on 1st down, Cover 1 on second and long, and quarters on 3rd and long. Also get a mix of Cover 6.

Against the Ravens, they started a two minute drill in Cover 3 and then after Baltimore picked up their first first down, they reverted to Cover 6. 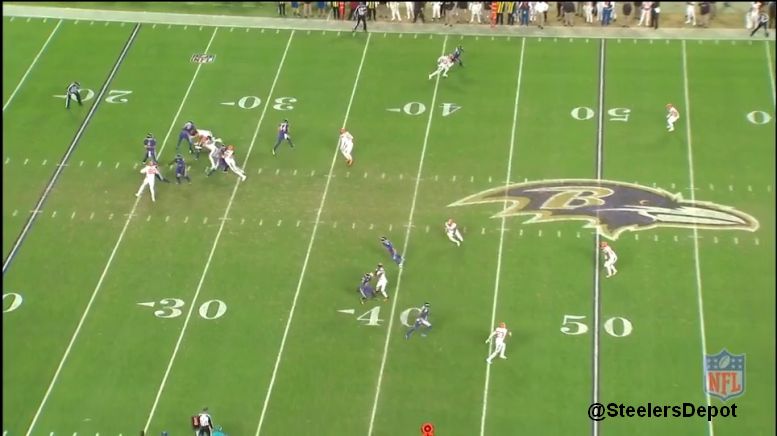 Not a crazy blitz team but run some stuff. Some Mack blitzes. They also brought this blitz from the boundary when the CB, Haden, was left without a man on 3rd and 6.

Britton Colquitt is a really good directional punter. He can pin you to the left side from the right hash and isn’t someone who is going to kick the same hash he’s on. So he’s tough to get a read, I imagine his “spray chart” of punts doesn’t have a clear pattern like most punters.

You can usually tell the direction by which of the gunners screams inside off the snap but of course as the returner, you’re not focusing on that. So it doesn’t really help.

WR Ricardo Louis and CB Marcus Burley are the gunners. On the punt team, Campbell and Kindred are the wings with Reynolds as the upback.

Linebacker Tank Carder, #59, is one of the league’s ultimate special teamer. He’s fourth in the NFL in special teams snap percentage, playing over 85% of those snaps.

The slouching Steelers take on the downhill tobogganing Browns Sunday afternoon, as both teams are extremely desperate for a win- the Steelers, to break their current 4 game losing streak, and the Browns for, well, obvious reasons. Although the offense looked like they found their groove, their lack of momentum and confidence could really wound them. Let’s take a look at the defensive players they’ll be sparring with.

The Browns, like many of the teams we’ve seen thus far, line up in the traditional 3-4 base defense. That being said, traditions don’t mean much anymore as teams are deploying the nickel and dime defenses as bases. This defense is, however, anchored by big man Danny Shelton, who is truly one of the few standout players on either side of the ball for Cleveland. He’s playing against the run as good as any defensive tackle in the league, and is even able to offer glimpses of his pass rushing abilities from time to time.

Taking a look below, we see exactly that. Shelton lines up in the a gap, ready to burst through on command. As soon as the ball is snapped, Joe Flacco hands the ball, and Shelton sniffs out the ball carrier faster than you can say Primanti bros.- he soaks him up like a sponge, stopping the play for a measly 2 yards; a play that could have easily went for 5+ if Shelton wasn’t there. 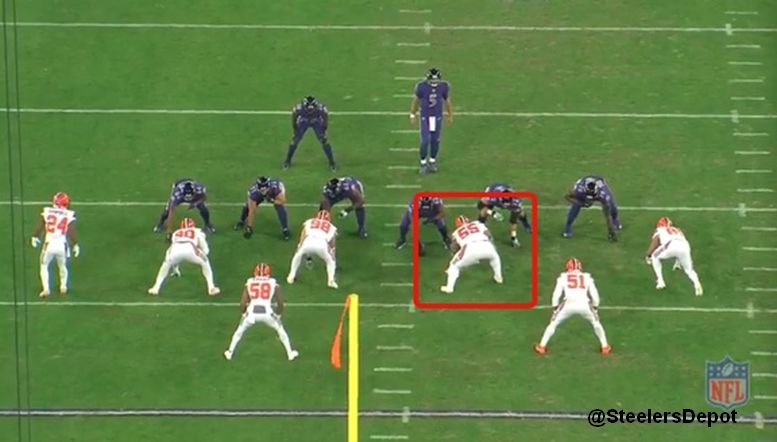 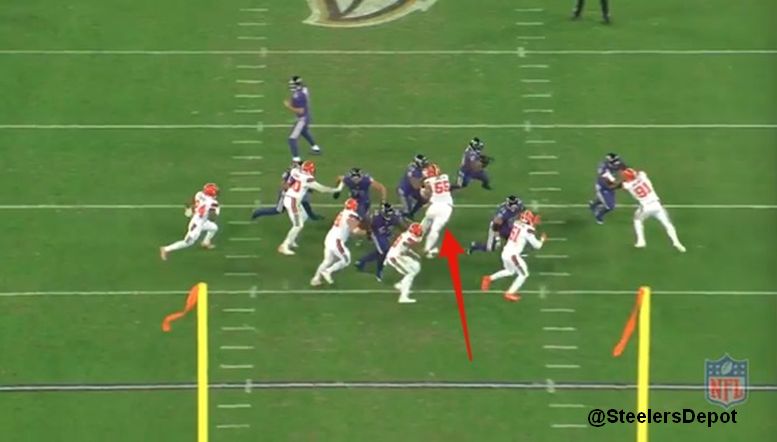 Overall, he’s the team’s highest graded player (via Pro Football Focus), and really uses that 6’2” 340 pound frame to fling offensive linemen aside like a sack of potatoes. He registered his best game of the season last week against the Baltimore Ravens, accounted for 5 tackles, 2 stops behind the line of scrimmage and did what he could to prevent the dual headed running backs from amounting much success.

On either side of Shelton are Jamie Meder, and Emmanuel Ogbah; notoriously encapsulating the phrase, “you’re only as good as your weakest link”. In this case, both Meder and Ogbah are tied in that category, which really speaks to Shelton’s ability and motor. Both players are ranked last and second last in overall grades, playing absolutely horrible against the run.

They have difficulty sticking to their assignments, and rarely win battles in the trenches- pair that with their inability to fill gaps, and you might as well wipe the drool off of your face- Le’Veon Bell and the offensive line have to be pumped to have this opportunity after experiencing their recent struggles.

Let’s move onto the pass rushers, with newly minted linebacker Jamie Collins making just his third start in a Cleveland uniform. He’s been knocked for his rover-style of play; he rarely adheres to assignments. That may have worked in New England, where there was ample talent (both on the field and sideline) to compensate for his lack of awareness, but that just doesn’t fly in a place where you’re expected to single handedly fix a team’s struggles.

Overall, Collins has shown flashes, but has truly struggled in the run category. I’d say last week’s game was one of his weaker of the season, which again, doesn’t bode well heading into rivalry week with a team that’s more desperate for a win than a pig trying to escape a slaughter house. That’s the current state of the Pittsburgh Steelers. That being said, he did have his moments- take a look below. 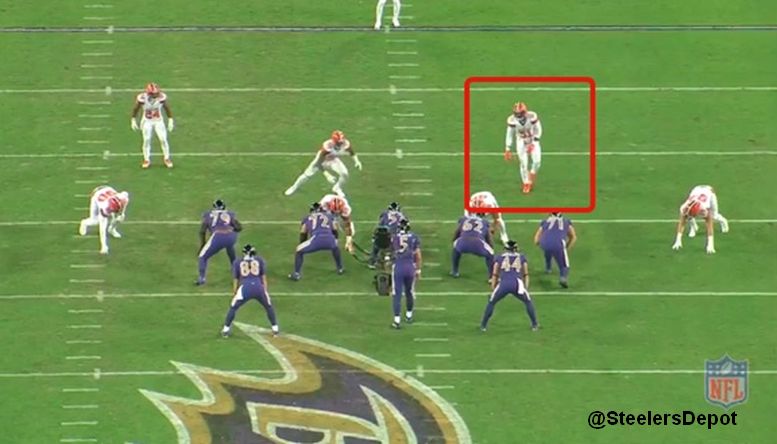 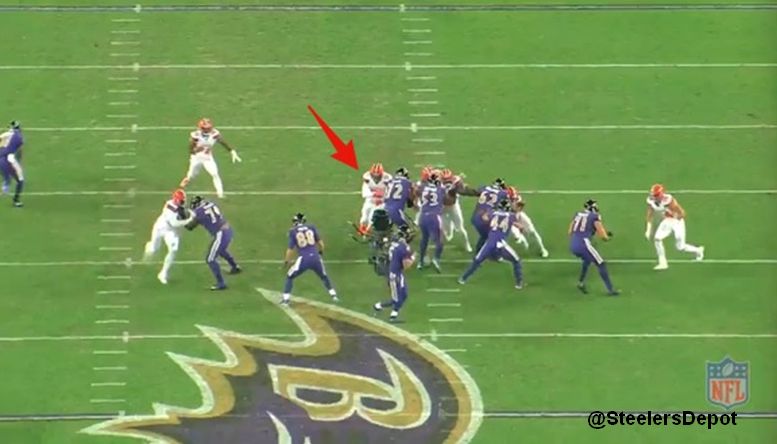 Collins comes in on a stunt, freezing the offensive line who clearly isn’t quick enough to react in a timely manner. He bursts through relatively untouched and gets to Flacco for the 9 yard sack; speed kills, always.

Opposite Collins is Cam Johnson, who has chosen the path of mediocrity, which, based on the current state of the Browns, isn’t that bad. The only category he’s truly demonstrated struggles is with penalties. I guess you could say he’s most likely to illustrate a lapse of judgement, and the Steelers should target that.

Inside we have Demario Davis and Christian Kirksey, who by the way leads all defensive players in snaps with 709. If Shelton is the team’s anchor, then Kirksey is the team’s pulse. He’s only one of a few players who grade positively in both run defense and rushing ability. He’s racked up 2 sacks, 3 quarterback hits, 7 hurries, and leads the team with 38 tackles behind the line of scrimmage. Look for him to be a lightning rod on Sunday afternoon.

Davis, on the other hand, is one of the lowest rated players on the defense- the true ying-and-yang. He struggles against the run, usually being swallowed up by would-be blockers, and is second on the team in defensive snaps played at 607.

The secondary has had their fare share of struggles, as cornerbacks Joe Haden and Jamar Taylor have tried to do their part to avoid becoming only the second winless team in NFL history. Taylor had his best game by far two Sundays ago against the New York Jets, allowing only 3 receptions on 7 targets for 79 yards and an astounding 4 batted balls. He’s a really aggressive corner who usually plays on the border of too aggressive.

Haden is a name we’re all familiar with, who has also had his bright and dark spots thus far. In the same game, he also allowed only 3 receptions on 7 targets for 55 yards with a lone batted ball. He has, however, struggled in the run game, being thrown all over the field when facing blocking wide receivers. Again, Bell and co. must be licking their chops for Sunday’s meal- I mean matchup.

The safeties consist of Tracy Howard and Ibraheim Campbell. Howard has held his own on the backend, but has struggled a bit when his number’s been called upon. He’s yet to register a positively-graded game. Other than Jamar Taylor, no defensive back has registered anything close to positive, actually.

Campbell hasn’t shown much, being absolutely eaten in coverage, and against the run as well. Against another pass-heavy team in the New England Patriots (although the Steelers may choose to keep the ball on the ground for the better part of the contest), Campbell allowed 3 receptions on 5 targets for 82 yards and a touchdown. He can definitely be had, and Ben Roethlisberger and co. are surely hoping this perfect storm is the game that returns them to the win category.