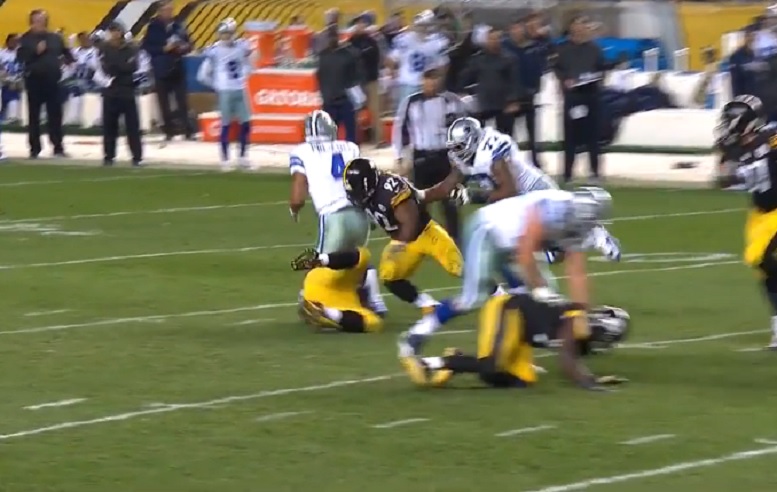 When the Pittsburgh Steelers defense sacked Dallas Cowboys quarterback Dak Prescott in the third quarter of Sunday’s loss, I initially thought that linebacker James Harrison was going to be credited with a half a sack on the play and thus tie Jason Gildon for the all-time franchise sack record. That of course didn’t happen as the league’s official scorer at the game credited defensive end Stephon Tuitt with a full sack on the play.

The Elias Sports Bureau looked at that sack this past week to see if a scoring change was in order and ultimately decided that the initial ruling was correct. Here’s what they had to say as to why Harrison wasn’t given a half a sack on the play in question, according to Bob Labriola of steelers.com.

While it’s a tough call, their explanation does make sense. Below are two animated gifs of the sack for you to look at and decide for yourself.

“Hey, that’s the way they saw it,” Harrison said, according to Ray Fittipaldo of the Pittsburgh Post-Gazette. “That’s just the way it is. You move on and go to the next week. They sent it in for review and they gave it to Tuitt. It is what it is.”

Harrison, who is now expected to start over Jarvis Jones Sunday against the Cleveland Browns, will have a chance to break Gildon’s record in the same city and against the same team that he recorded his very first NFL sack back in 2004. If he’s to accomplish that feat, however, he’ll likely have to beat Browns left tackle Joe Thomas, who remains one of the best in the league at his position.