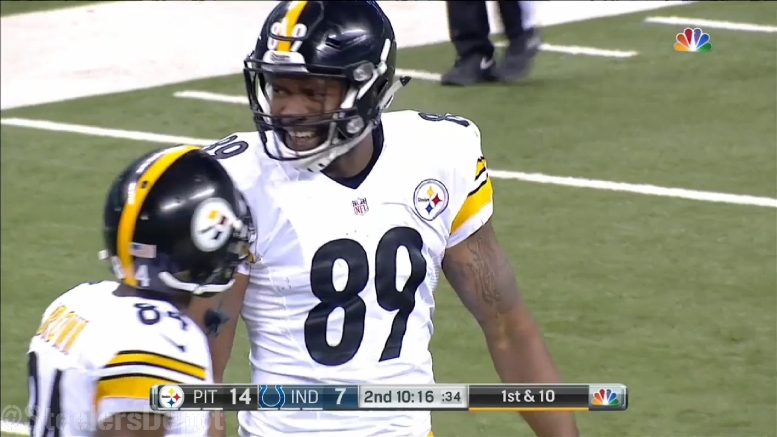 Pittsburgh Steelers quarterback Ben Roethlisberger is a veteran. It takes him a little while to really warm up to people stepping into new roles. He had the same issue with the veterans when he first came on board more than a dozen years ago.

You can tell in his comments that he has made over the years the way he veils his reservations. He did so when talking about Le’Veon Bell during his rookie training camp. With the exception, perhaps, of offensive linemen, he always takes the wait and see approach.

Which is the approach that he took with this year’s “Ferrari”, free agent tight end Ladarius Green, whom the Steelers didn’t see on the field, at all, until a few weeks ago. Green, of course, spent the first half of the season in the Physically Unable to Perform List.

But he has been active for the past three weeks and has played a limited role since then. He caught three passes for 30 yards in his first game. On Thursday, he had two big catches for 32 and 35 yards, respectively, which more than tripled his total yardage on the season. And it got Roethlisberger excited to see.

He talked about it during his radio spot yesterday on 93.7 The Fan. He talked about Green “stretching the defense”, and how “we were making fun of him” following the first reception, joking that it was a great play, but they wanted to see him score. “We want to see even more”, he said.

“Maybe we’re being a little greedy”, he continued, “but just for him to come back to us and really start doing some awesome things, we’ll all excited about that”. The Steelers brought in Green this year because of his potential big play ability from the tight end position.

He was asked about his thoughts on Green’s journey and how he has been questioned every step of the way, even to the point of people saying that he shouldn’t have been signed, and wondering if he would even play.

“You see every week, almost every day”, he said, “different growth things. Even yesterday, him and I were talking about plays in the game. ‘Hey what do you think about this?’”, Green would ask him, as he went on to talk about a route being run and how his seventh step is so fast that Roethlisberger’s timing is off.

“If we would have had that time in training camp, that wouldn’t have been an issue”, he said. “I wouldn’t call it an issue now, but it’s something that we’re working through as we’re moving through a season. He’s such a hard worker and a guy that wants to learn and wants to be great”.

Roethlisberger concluded his comments about Green talking about how he is excited about their growing relationship on the field and what element that is going to bring to the offense. Clearly, he and Green’s teammates are expecting this to be just the beginning.