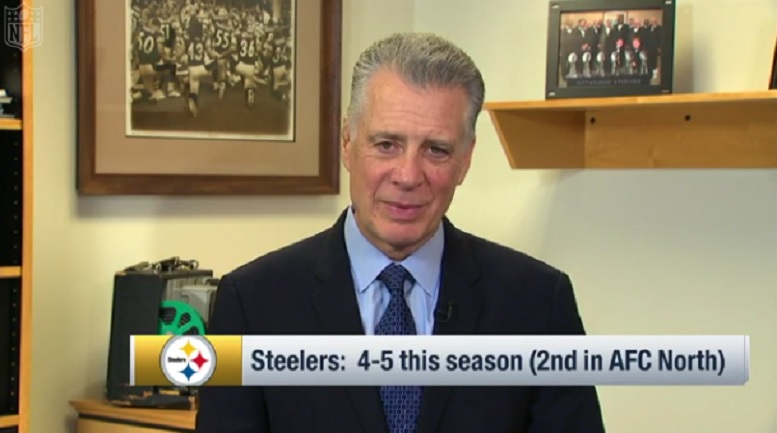 The Pittsburgh Steelers will be looking to break their four-game losing streak Sunday on the road against the Cleveland Browns and on Thursday, team president Art Rooney II made an appearance on the NFL Network and talked briefly about the disappointing 4-5 start.

“We certainly aren’t where we’d like to be at this point in the season, but there’s plenty of football left,” Rooney said. “We got to get started this weekend in Cleveland. Steelers-Browns is always a battle up there on the lake and I’m sure this week will be a battle and we got to be prepared for it and I’m looking forward to it.”

Rooney was also asked to comment on the recent comments made by Steelers quarterback Ben Roethlisberger that centered around the team being “undisciplined and not accountable” after Sunday’s loss to the Dallas Cowboys.

“Everybody is disappointed at where we are at this point, and I think we have to look in the mirror and say, ‘How can we better? How can we be accountable?’ I think that’s what he was saying,” Rooney said of Roethlisberger’s comments. “I think we feel like we’re certainly better than being 4-5, and so the proof is in the pudding. We’ve got opportunities coming up, there’s plenty of football, like I said. So, the objectives that we started the season with are still for us and now we just have to go out and get the job done on the field.”

The Steelers certainly have a great opportunity Sunday to get their season going in the opposite direction as they’ll be playing a Browns team that has yet to win a game so far this season. The Browns, however, are coming off a long week after losing to the Baltimore Ravens a week ago Thursday.

Rooney, who rarely comments on the team in the middle of the season, appears to be patient right now with seven games remaining in the season. That patience, however, will surely be tested Sunday afternoon should the Steelers losing streak extend to five games as a result of losing to the Browns.

The last time that the Steelers lost five games in a row was in 2009 and their fifth loss in that streak was to the Browns in Cleveland. While that 2009 team would go on to win their final three regular season games, they failed to make the playoffs with their 9-7 record.